“Open access electronic resources play a part in today’s research ecosystem, and African repositories are part of this”: Interview with Stephanie Kitchen, of the International African Institute

Today we are speaking with Stephanie Kitchen, Managing Editor at the International African Institute in London, England, about their African Digital Research Repositories project, why digital institutional repositories are important, and how they can effect change in a continent with an increasing focus on sustainable social and economic development.

(Archivoz) Can you give us a brief history of the International African Institute and its mission? How does the African Digital Research Repositories project contribute to this mission?

(S.K.) The International African Institute (IAI) was founded in London in 1926. It is best known for its journal Africa published since 1928 (now in volume 90). Its programmes and agendas have varied through the decades, but the IAI has been concerned consistently with promoting research and knowledge dissemination on the African continent. It was involved in foundational work, for example, on the codification of African languages and linguistic study. It is also known as a founding institution in what is still a central discipline in African studies – anthropology/ethnography. Since the 1980s, its work has largely focused on publishing and dissemination of information, as well as organizing and supporting conferences and seminars. The IAI publishes the journals Africa, Journal of African Cultural Studies, Africa Bibliography as well as several book series.

The African Digital Research Repositories grew from this work – notably the compiling of the annual, now digital, Africa Bibliography – along with growing interest in Open Access resources and online archival research. We were aware, for example, that a great deal of useful research in Africa is – and will likely will remain – unpublished in formal channels (book series and journals), but that increasingly institutions and libraries in the continent were making it available via repositories (often hosted in university libraries). Masters’ and PhD theses done in Africa contain a great deal of important research, often on ‘neglected’ topics. The idea of our modest – entirely internally funded – project was to research and begin to bring some of these repositories together in a way that might be useful to researchers throughout the world, and especially across the African continent. Initially we compiled lists of known repositories by country. It soon became clear that whilst some countries had quite advanced resources–in the North of the continent, in Ethiopia, latterly in Kenya, and in South Africa (including a large institutional repository at UNISA, the country’s long-distance learning university)–around 20 African countries had no known digital repositories. 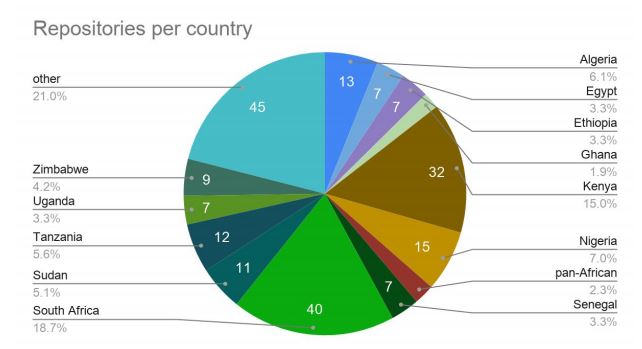 (Archivoz) In what areas is the most important research in Africa being done right now in terms of global impact? How do digital repositories support this work?

(S.K.) I am not sure I am qualified to answer the first part of this question! But African researchers and researchers from across the world working in the continent are contributing to research ranging from macro-economics and international relations, to public health and ecosystems research. Just now, as the IAI along with others in the African continent are trying to highlight via our blog African Arguments – Debating Ideas, social and biomedical research in Africa on responses to the Covid-19 crisis, as well as on earlier pandemics, notably HIV/AIDS and Ebola, is critical to local, regional and international understanding.

Open access electronic resources play a part in today’s research ecosystem, and African repositories are part of this, particularly in areas where local and contextual knowledge is important. Institutional repositories, such as databases developed by the UN Economic Commission for Africa or the African Union or the Repository of the Central Bank of Nigeria, may be key sources for economic, financial and political research.

(Archivoz) What level of participation or buy-in do you see across institutions on the part of faculty and/or students in the development of repositories? How is this participation encouraged/enforced?

(S.K.) Our 2016 study indicated that management of repositories in African universities falls largely upon libraries, where professional staffing generally is modest or lacking, as is training in the interface of repository work with more traditional librarianship. Our 2019 follow-up indicated an expansion of repositories, 48 additional repositories across the continent, in line with our finding that these were being encouraged at the highest level of universities, as well as wider Open Access mandates. We also found that at least 80 per cent of the repositories we surveyed in 2016 had a requirement in place for Master’s and PhD candidates to deposit their theses. In many cases, such deposit is required for degree completion.

Faculty involvement is more difficult to assess. As is the case elsewhere – in Europe and North America, I am unsure about Latin America – repositories are mainly considered the domain of librarians, or library publishing units. That said, faculty in Africa, in subjects such as history, for example, may be engaged in repositories and archives in ways that go beyond their Northern counterparts, since assisting with assembling such resources is essential to the present and future of their disciplines. There are doubtless many examples, but one I experienced personally was at the repository of the Université Cheikh Anta Diop in Dakar, where historians and anthropologists were themselves involved in compiling and digitizing theses and memoirs deposited at the University since its founding in 1957, as well as research articles, university publications and rare and valuable works. This involved academics scanning from their own private libraries as well as contacting colleagues around the world to locate missing copies of older studies.

(Archivoz) In an article from December 2016, Robert Molteno states that through the establishment of digital repositories across Africa, “[t]he continent, from being largely only the object of investigation, would henceforth become the primary author of its own understanding.”1 He also states that it will allow African scholars to share their research with “a global audience.” In your mind, does either of these foci—internal vs. external—take precedence? Do they compete with or complement one another?

(S.K.) In a world of mobility, connectivity and expectations that research conform with ‘international’ standards it is of course difficult, if not impossible, to separate ‘internal vs external’ foci. As our Institute has tried to emphasize, African research has always been part of ‘global’ research in many domains, as illustrated through its long-term contribution to knowledge of infectious, or ‘tropical’, disease and public health. Equally, leading African postcolonial intellectuals – Claude Ake, Okot p’Bitek and Ngugi wa Thiong’o, among many others – have prioritized research and knowledge production in their own societies. Following Molteno, scholars such as Francis Nyamnjoh would argue that this is done through, for example, African authors and researchers ‘publishing in Africa’. Development of publishing – including repositories and academic journals – infrastructure in the continent does remain a major task, one that is perennially challenged by often unhelpful or adverse schemes or policies, usually developed outside the continent in ignorance of specific contexts, that may undermine an already fragile and fragmented system. The European Union-driven Plan S, self-evidently Eurocentric and with scant regard for knowledge production systems outside the global North or ‘global science’, is a good (bad!) example of this.

(Archivoz) One element of the African Union’s Agenda 2063 is promotion of a pan-African cultural renaissance. Some African cultural institutions, such as the National Gallery of Zimbabwe at Bulawayo, make an explicit connection between heritage and development, suggesting an archival model that should be as much about access to cultural as to intellectual/academic production. Do you see potential for this sort of “collecting” in the repositories you have studied?

(S.K.) Cultural studies in Africa, including art, film and heritage studies, is a vibrant field at present, as we reflect in our Journal of African Cultural Studies. But among the repositories we’ve studied, there are not too many examples of such institutional practice. The Rare Books and Special Collections Digital Library at the American University in Cairo is one. The repository of the Université Cheikh Anta Diop in Dakar discussed above is another. A further example is Archives Africa (National Archives of Madagascar), which bring together a wealth of ‘unexplored records on the history of Madagascar’ under the strapline ‘curating Africa’s cultural heritage.’

(Archivoz) On your website, you mention hopes of at some point creating a greater degree of inter-searchability among the existing African repositories. Given that UN Sustainable Development Goal 17 represents an explicit call for enhanced global partnerships, how important is it that these connections between individual institutions, and between these institutions and the rest of the world, be strengthened?

(S.K.) A recent project, done together with AfricArXiv, developed an interactive map of African digital research repositories. This extended earlier work to include organizational and governmental repositories. It also maps interactions between research repositories, and is aimed at promoting their use and connectivity with digital scholarly search engines and research. I would also draw attention to the recently published research of the LIBENSE network. 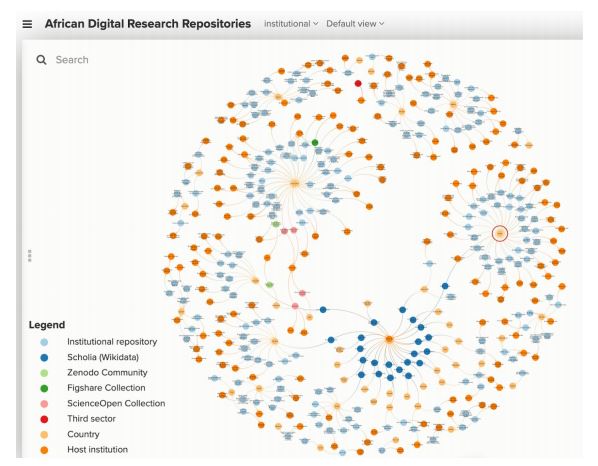 Overview of the visual map of African digital repositories. Nodes represent countries with their connections to various types of repositories as distinguished by color code.

One of the striking observations of the African repository landscape even five years ago was its fragmentation, so we hope these initiatives represent some advance. But compare them with the Latin American REDIB repository which lists over 1,100 institutions, 3,000 plus journals and over a million documents. The IAI’s efforts are intended to consolidate and promote known repositories in the continent (including in global search engines) as a service to African studies research resources. This work, we know, has been appreciated by librarians as well as by the repositories themselves, that appreciate the exposure, and new repositories write to us from time to time requesting to be listed. That said, political will and thus resources for trans-continental, or ‘Pan-African’, publishing projects are lacking or difficult to access within the African continent, and in Europe or North America, ignorance of what is needed is often a problem – despite the UN goal you cite.

(Archivoz) At this point, what do you think is the biggest challenge facing African institutions that wish to establish digital repositories of their own?

(S.K.) Impediments should not be technological (as our report showed). Open Access platforms are available, when there is political will and support from heads of institutions. There is also an established and growing consensus of the value of Open Access research resources as a public good throughout the world. Now added to that is the pressure on all institutions to improve online resources (and eventually teaching and research) in the wake of the Covid-19 pandemic. That said, we observed pressures around resources for IT, staffing, skills, training and lack of networking beyond single institutions. It is hard to see immediate significant improvements in these areas given the effects in Africa of the coming global recession.