Revealing watermarks – a remote collaboration between Conservation and Imaging 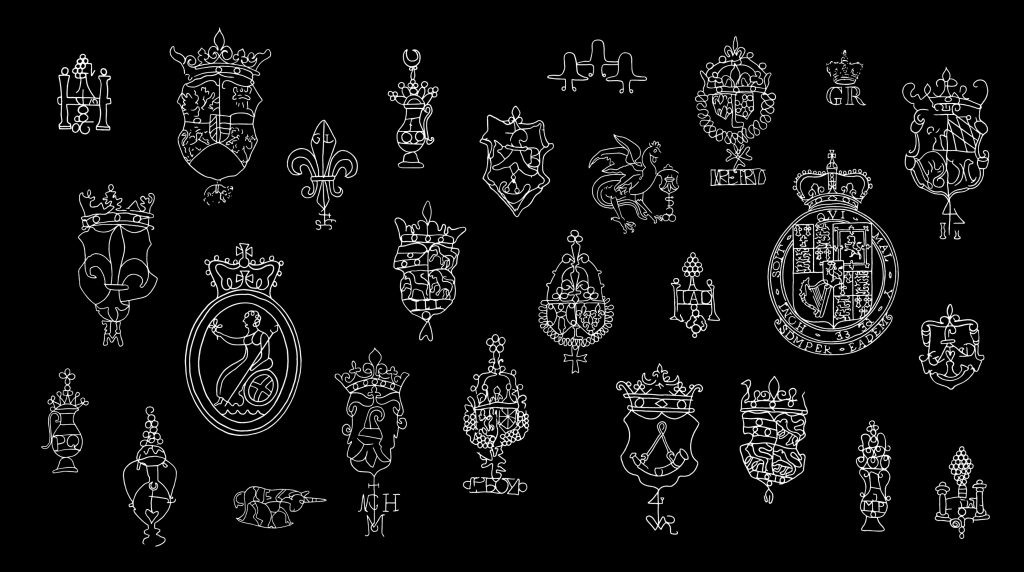 As for so many people, lockdown has meant huge changes to our working lives. As the conservation and imaging staff on a digitisation project, many aspects of our work rely on physical access to collection items, studios, and equipment, and at first it seemed difficult to reimagine a work life so rooted in practical tasks. While this moment of reimagining felt simultaneously exciting and confusing, one thing it provided was the chance to reallocate time. With the removal of ‘business as usual’ came a rare opportunity to dedicate time normally reserved for the essential to the wider elements of what constitutes ‘work’. One way we managed to navigate this was through a collaborative project based on the watermarks from some of the documents we have been digitising for the Qatar Digital Library (QDL): a series of ship’s journals from the East India Company’s earliest voyages (1605-1705).

The idea began within the conservation team (Heather Murphy and Camille Dekeyser) who initially intended to use these watermarks to trace historic routes of the paper trade and commerce within Europe. We had hoped to use the watermarks to uncover specifics about papers and documents, such as their date and location of manufacture, but quickly found that establishing these details depends on a wide range of variables. It became obvious that the project could grow in multiple directions. As well as revealing the watermarks’ value for academic research, we wanted to highlight other enticing elements: their curious symbols, aesthetic appeal, and ability to appear and disappear. This rich combination of factors seemed worth investigating, to see if we could help people experience these often hidden parts of the collection (especially in their digital form, where watermarks are invisible most of the time).

The first step was to make our own watermarks out of wire, and trial these by making paper. After researching how to make a mould and deckle, we were able to sew the watermarks onto the frame and begin making our first watermarked papers. This proved both fun and instructive, so much so that we went on to run a papermaking workshop for other colleagues at the British Library. 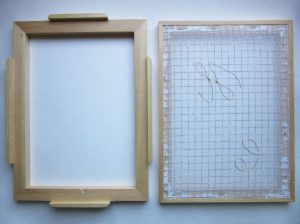 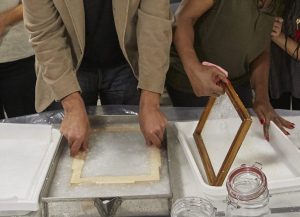 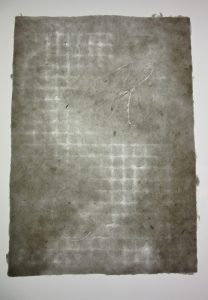 It felt logical that a project with multiple elements would benefit from multiple inputs, so we sought out collaborators from among our talented colleagues. Before anything else, we needed to create good quality images of the watermarks which could be easily viewed. Until then, we had been working from handmade tracings, which we had been compiling, researching, and comparing with online databases. 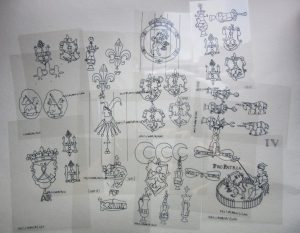 These were a helpful starting point, but lacked accuracy and clarity. With this in mind, we began collaborating with Senior Imaging Technician Jordi Clopés Masjuan and Senior Imaging Support Technician Matt Lee, to discuss the practicalities of creating clearer images. Jordi suggested creating a series of images through which the watermarks could be ‘revealed’: one image capturing the watermarks as they appear on the digitised image (almost or completely invisible), and another showing them illuminated by backlighting. 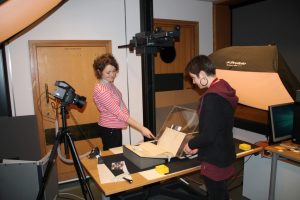 Although the imaging studio we use is equipped with high quality lights, sensors, lenses, etc., the technique Jordi used to capture the watermarks was quite simple. We first designed and made a triangular structure from vivak (commonly used for exhibition mounts and stands), which enabled us to support the page safely and ensure that it would not move during the capture.

Using a tripod to avoid any movement, we took two consecutive images using only one light for each image: the first was strategically placed behind the camera (to light the ‘original’ view of the folio) and the other behind the document as a backlight (to highlight the watermark). It was crucial that neither the camera nor the document moved, in order to create two images for an exact comparison. Once captured, Jordi worked with the images in Adobe Photoshop to accentuate key points of contrast. While the first image needed no editing, the second required custom adjustments to the levels, curves, saturation, and brightness to reinforce the watermarks. 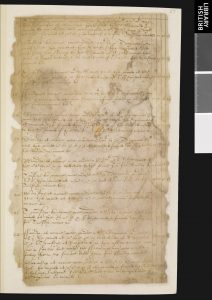 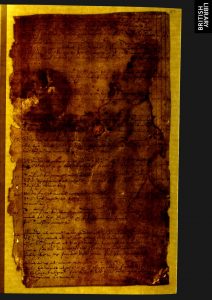 Jordi then further suggested that we could overlay the two images online, using a digital tool that would allow the user to slide one of the images across to reveal the other, enabling an interactive comparison.

Fortunately, the watermark images were captured prior to the first national lockdown in March 2020. Working from home, Matt imported these digital images into an iPad and traced the outline of the watermarks using the Procreate drawing and painting app. The task was time-intensive, but proved a welcome distraction.

These digital drawings gave the watermark designs a more tangible form and enabled us to compare and categorise them by type. The fleur-de-lis is one of several common motifs, while another features a jug (see below). Compiling the different iterations has revealed subtle differences in the design, shape, and lettering. 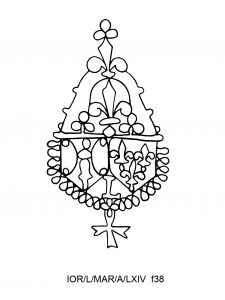 In these earlier examples, it is harder to discern the origins of the design, but they often draw on imagery related to trade guilds and religious symbols, as well as incorporating lettering and abbreviations. Many early watermarks can appear almost identical, but exhibit many small differences which are likely imperceptible unless you know what to look for. This may result from distortions caused by wear and tear to the moulds, but could also be due to early papermaking techniques which used a pair of moulds, or double mould, to create pairs of watermarks referred to as ‘twins’. Even these may contain minor differences, perhaps because they were created by different workers, and/or were placed on opposite sides of the mould. A design might have been reversed on different sides of the mould, or placed differently in relation to laid and chain lines. Some include abbreviations of names and initials, or differences in countermarks. Matt’s drawings of the different variations in our watermark designs offer a great way of studying and comparing their motifs.

With these digital tracings, we decided to add a third ‘view’ to Jordi’s interactive comparison tool, incorporating Matt’s drawings to further illuminate the watermarks.

As the GIF shows, Jordi was able to combine our images with this ‘slider’ tool, allowing people to unveil the invisible watermarks by moving the arrows. Our hope is to incorporate this into the QDL, along with contextual articles about the watermarks, but integrating such a tool requires considerable back-end coding, and at the time of writing it has not yet been possible.

The latest addition to this work emerged from conversations with a close friend Eva Sbaraini about her work in 3D printing, when we decided to collaborate to investigate potential uses for 3D printing within conservation. We started by trialing a 3D print of one of the designs in an attempt to give these partially hidden images a physical form. 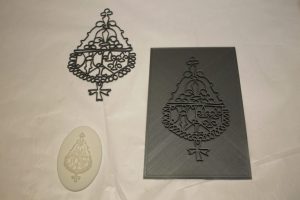 From these first tests, we are hopeful that 3D-printed watermarks could be used as tactile visual objects for tours, demonstrations, presentations, or workshops, and have been eagerly gathering input from colleagues across different specialisms on other applications. Moving forward, we see possible uses in the realms of teaching, learning, and engagement.

We have also sewn 3D-printed watermarks onto our mould, to test them in the papermaking process. This has allowed us to adapt and study elements of existing designs. 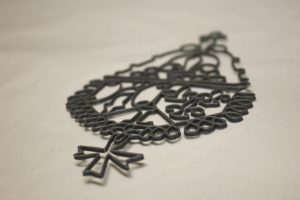 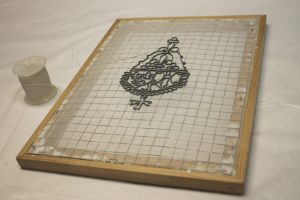 This 3D-printed watermark is an enlarged replica from one that appears in our collection. It was created by converting Matt’s vector image into an SGV file from which to 3D print. 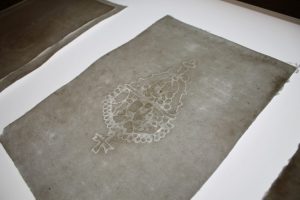 We have even created and 3D printed our own entirely new and intricate design, which is next in line for a papermaking trial. It is made up of the initials of everyone involved in this project. 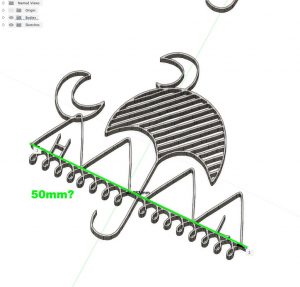 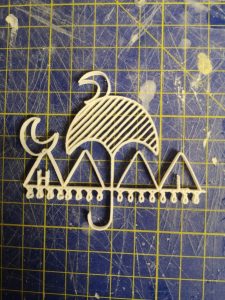 This collaboration has taught us about each other’s distinct specialisms, and is a remarkable testament to what can be achieved together while working remotely. We have seen the project move from practical, physical elements into the digital realm, and from the digital creations back into new physical manifestations. When we are back in our respective studios at the British Library, we plan to continue working on digitising the watermarks of other series, perhaps finding more ways to make these available for audiences to study and enjoy.

To read more about the process we followed in digitising the watermarks, see the blogpost ‘Making Watermarks Visible’, written for the British Library Digital Scholarship blog. 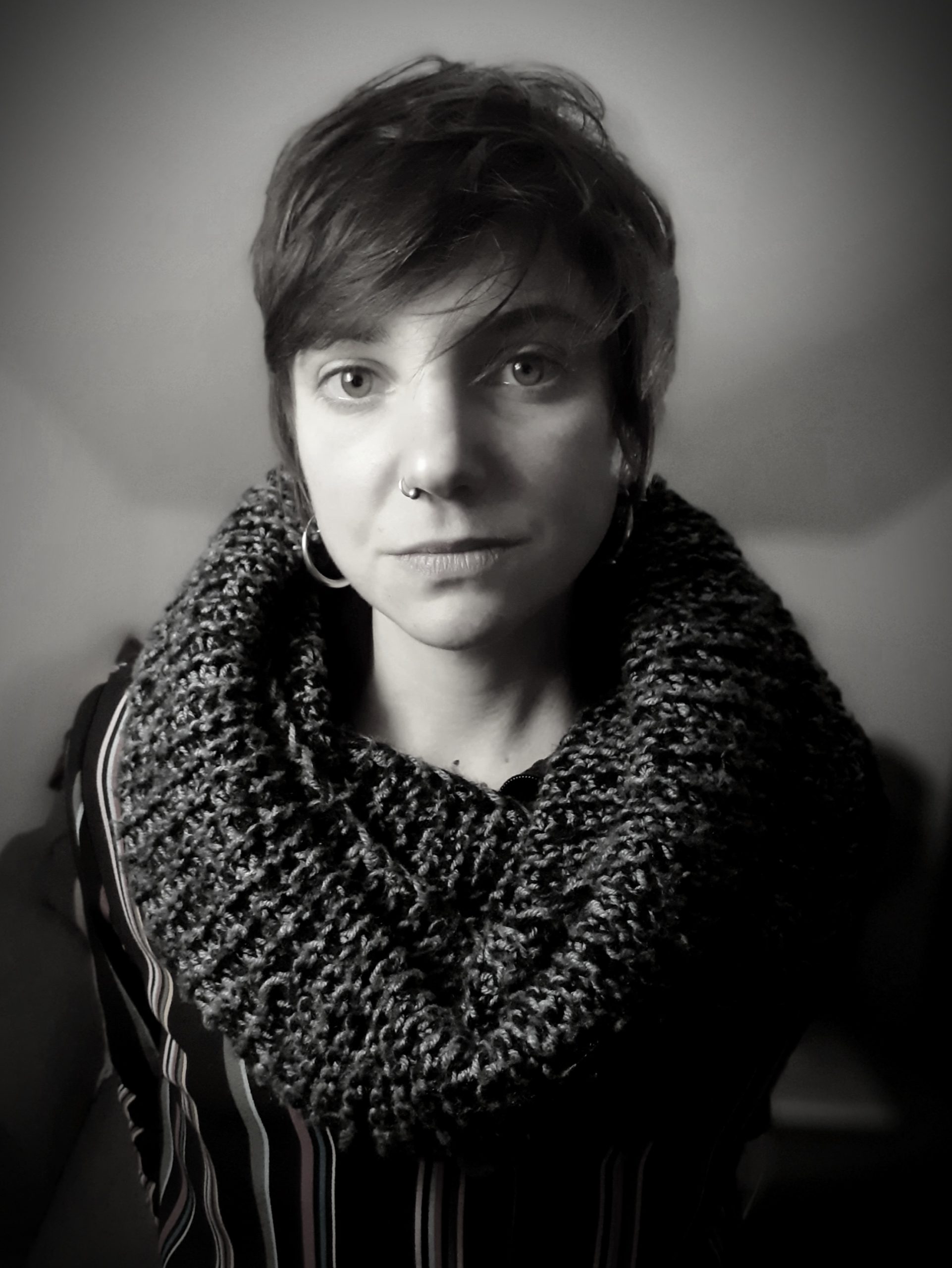 Heather Murphy is the conservation team leader for the British Library Qatar Foundation Partnership Programme. Since graduating with an MA in the Conservation of Artworks on Paper from Camberwell College of Arts in 2015, Heather has worked with a number of institutions, including the BFI National Archive, The Royal Collection, Wimbledon Lawn Tennis Museum, and the Stanley Kubrick Archive, as well as undertaking conservation work for private clients. Alongside conservation training, Heather has also worked for a number of studios and workshops doing picture framing and bespoke leather and vellum work. Heather holds a BA in Fine Art Painting from Wimbledon College of Art, and continues to maintain her own drawing-based art practice, which has become increasingly influenced by her work for museums and archives and by the materials involved in book and paper conservation.

Camille Dekeyser is a conservator at the British Library Qatar Foundation Programme. She holds a BA in book design and an MA in book conservation from ENSAV La Cambre in Brussels, Belgium. Before settling in the UK, she worked with a number of institutions over the world including Palais des Beaux-Arts in Lille, Trinity College in Dublin, and MIT libraries in Boston. As a parchment specialist, she has collaborated on different projects involving high profile manuscripts and unique items from the British Library’s collection. She has a passion for book structures, bookbinding, and parchment. Learning from her peers and keeping alive bookbinding techniques long forgotten is Camille’s way of giving back to the great conservation world. 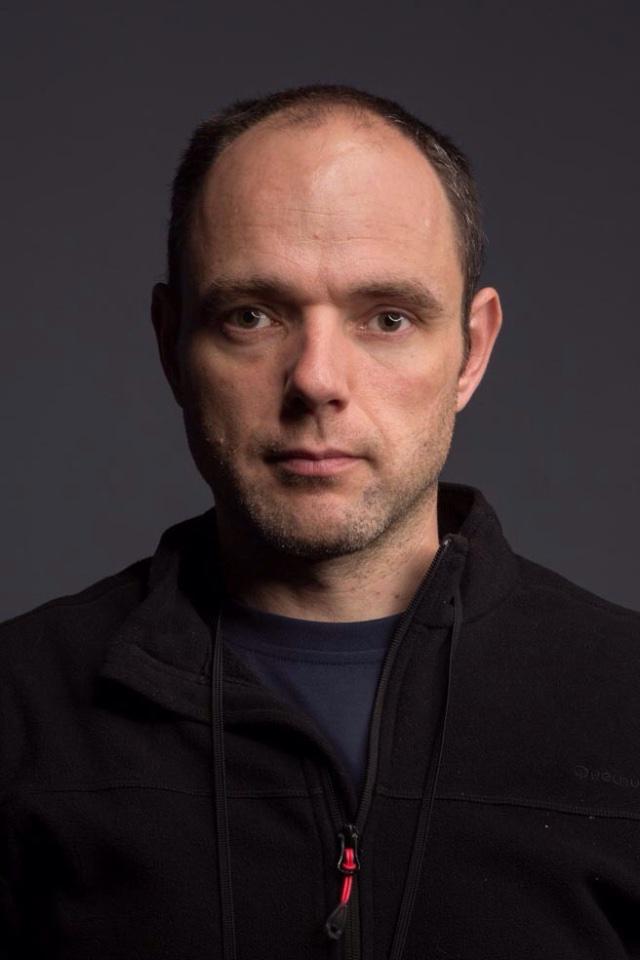 Jordi Clopés Masjuan is a Senior Imaging Technician at the British Library Qatar Foundation Partnership Programme. Jordi has previously worked and collaborated as a photographer with a number of institutions in the UK including the British Museum, Imperial War Museum, Science Museum Group, Internet Archive, and the British Library. Before moving to the UK, Jordi taught photography at ERAM University in Spain, where he was also the coordinator for the Master’s Programme in Creative Photography. Jordi has a long history as an entrepreneur, he co-founded and ran a successful hospitality business for more than 15 years, before deciding to follow his passion in photography. Jordi has a BA degree in Audiovisual and Multimedia Communication from ERAM University in Spain, where he also earned a Master’s Degree in Creative Photography.

Matt Lee is a Senior Imaging Support Officer for the British Library Qatar Foundation Partnership Programme. He is also a tutor on the BA (Hons) Illustration programme at the Open College of the Arts and a visiting tutor on the BA (Hons) Illustration course at Arts University Bournemouth. Between 2007 and 2017 he worked as a senior lecturer at Srishti Institute of Art, Design and Technology in Bengaluru, where he founded the Storybook Lab, led classroom client projects in partnership with development organisations, and taught illustration, visual communication, and art practice. Matt’s artwork has been exhibited across North America, Europe, Asia, and Australia, including at the Centre Pompidou in Paris and the Mall Galleries in London. His illustrations have been published by Gestalten, The Guardian, The Independent, FT and Time Out. Matt holds a BA in Design: Illustration from Plymouth University and an MA in Visual Arts: Digital Arts from Camberwell College of Arts, University of the Arts London, for which he received an Arts & Humanities Research Council award. www.matt-lee.com