The British Library/Qatar Foundation Partnership is digitising records from multiple collections about the history of the Persian Gulf, with the vast majority coming from the India Office Records (IOR) collection. The records are freely available on a bilingual online portal, the Qatar Digital Library. As part of this process, we produce enhanced catalogue descriptions for all of the digitised records, which are provided in both English and Arabic.

Already conscious of problematic language within the IOR material, a talk by Melissa Bennett in 2019 motivated us to take a closer look at this language. When the first Covid-19 lockdown presented us with an extended period away from the physical records, we decided to use some of that time to explore our own descriptions for this collection, and to reflect on the terminology we were employing.

Caption: GIF demonstrating bilingual nature of the QDL, where all catalogue records are produced in both English and Arabic (copyright QDL).

The majority of the content on the QDL comes from the India Office Records, a huge archive incorporating the records of the English East India Company and the India Office. These records are vital for understanding the modern history of the Gulf, which was essentially treated by British officials as an extension of British India. However, we must bear in mind that they are also colonial records which narrate history through the eyes of the British traders, officials, and naval officers who came to dominate the region during the nineteenth and twentieth centuries.

Whilst traditional cataloguing approaches have called for neutrality in descriptions, there is a growing acknowledgement that this is inadequate when dealing with the legacies of colonialism. Neutrality often ignores the context in which records were created and can lead to presenting the records as neutral themselves. There is a need to think critically about the language we encounter in the records, to acknowledge the imperialist viewpoint it conveys and the offence it can potentially cause, and to take steps to avoid replicating it in the descriptions we write.

A group of cataloguers, translators, and digitisation specialists on the BLQFP have been carrying out an investigation into the problematic language we encounter in IOR material and coming up with suggestions for how to better catalogue this material, an undertaking we now refer to as Conscientious Bilingual Description (CBD). In this article we have outlined some of our methods and experiences. We hope it may be of interest to those seeking similarly to deal with colonial language and biases in their records.

The first thing we had to do was to identify terms that were potentially problematic. We compiled a list, drawing on our own knowledge of the records, as well as making use of existing resources, in particular the Words Matter glossary produced by the National Museum of World Cultures in the Netherlands.

However, as useful as such resources were, we wanted to make sure that our understanding of these terms was rooted in how they were used in the records, and so we spent some time carrying out research. This was a collaborative effort, drawing upon the historical, archival, linguistic, and cultural knowledge that a large project such as ours is fortunate to be able to bring together.

In addition, our research was aided by technology. A former member of our team, Sotirios Alpanis, produced a python script that could search for a term across all of the QDL’s catalogue descriptions, and return results that allowed us to view how a term appeared in its context. In parallel, Translators relied on the Translation Memory within the translation management software they use (memoQ) to investigate previous translations. This enabled us to quickly accrue examples and to gain a better understanding of the nuances of historical usage. 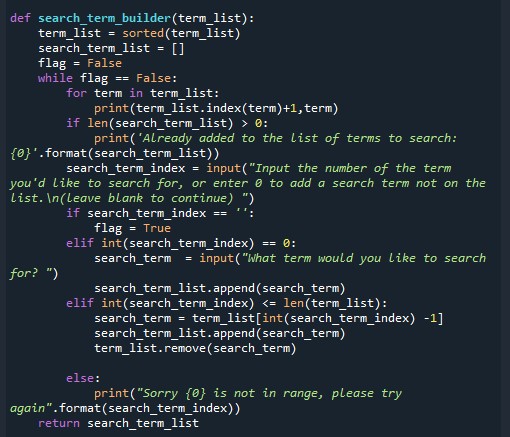 It soon became obvious that rarely could a term be easily deemed either problematic or not problematic. Rather, it often depended on the context in which a term was used. While a few terms were clearly offensive, most were problematic in more complex and historically rooted ways. This, in turn, required us to come up with different ways of dealing with these terms. Sometimes a small intervention was sufficient, but in other cases we needed to develop more extensive treatments. To this end, we sought to place the terms into one of four categories: 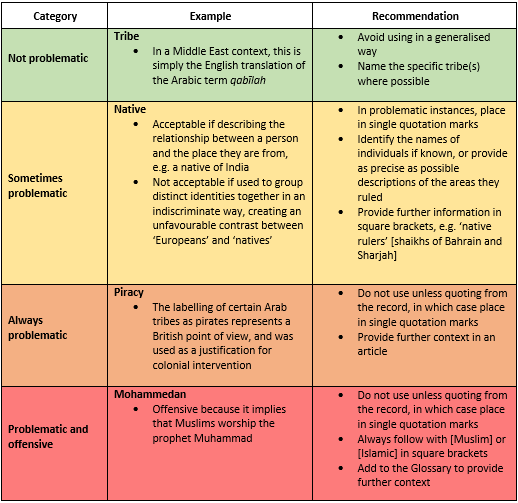 When deciding what treatments to apply, we were initially guided by Alicia Chilcott’s recommendations for the description of records containing offensive terms. Chilcott suggests, as a basic but effective intervention, that within catalogue descriptions offensive language from a record should be identified with quotation marks, and recognised alternative terms be employed. This has the added benefit that users will not need to employ derogatory terms about their communities when searching the records.

Some terms, however, required more detailed treatment than could be provided within a file or item-level description. Fortunately, the QDL has spaces we could use to this end. One of these is the QDL’s dedicated Glossary, which we plan to use to provide further contextual information for problematic and offensive terms, such as ‘Mohammedan’. In addition, the QDL has a space for articles providing introductions to the records and their historical contexts. We are using this space to provide further information about terms whose historical importance and complexity merit a more detailed analysis. One such term is ‘piracy’, on which we wrote an article to highlight its problematic nature from the points of view of both cataloguers and translators. 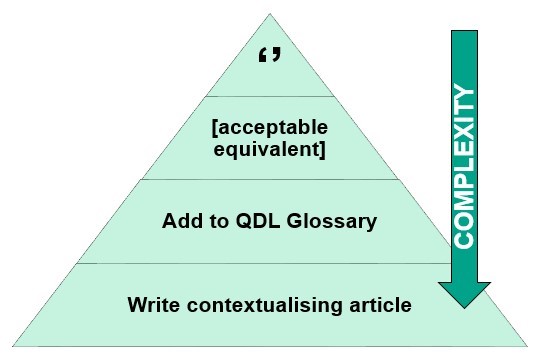 Caption: Summary of potential treatments depending on a term’s level of complexity

This initiative remains a work in progress, and we are still discovering new terms that need investigating, as well as improving our knowledge and treatment of terms of which we were already aware. We are currently gathering feedback and are grateful for the invaluable input of the wider IOR team within the British Library. Our work so far has highlighted to us the unpredictable complexities of terms. For each one we identified it was necessary to carefully examine its use in the records, and to suggest a treatment accordingly.

The key outcome of our efforts so far is more consistency in our cataloguing and translation practices, and more distance between ourselves and the record creators. In addition, the more specific naming of individuals, groups and locations enhances discoverability on the QDL, and the extra layers of context to the records enriches the user experience.

Through these efforts, we hope to develop the QDL as a resource which shows respect to its users by addressing the offensive language in the records and, by doing so, allows users to go beyond the narratives of colonial history that these records present.

Above content is copyright of the BL Board unless stated otherwise. 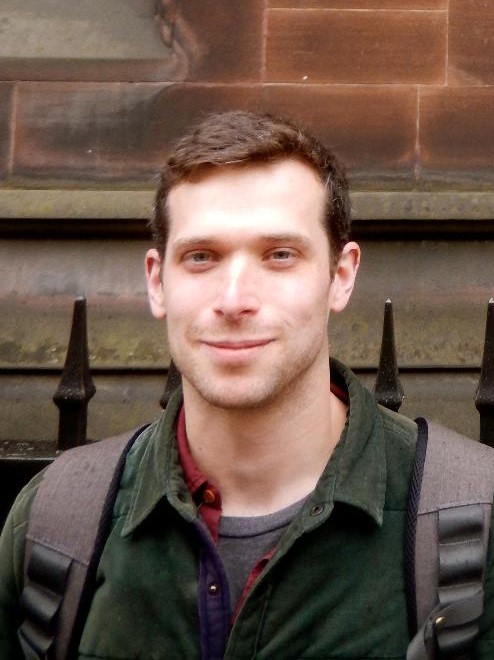 David Woodbridge is a Gulf History Cataloguer at the British Library/Qatar Foundation Partnership Programme. He holds a PhD in History from the University of Manchester, and his research relates to the history of British imperialism in Asia. 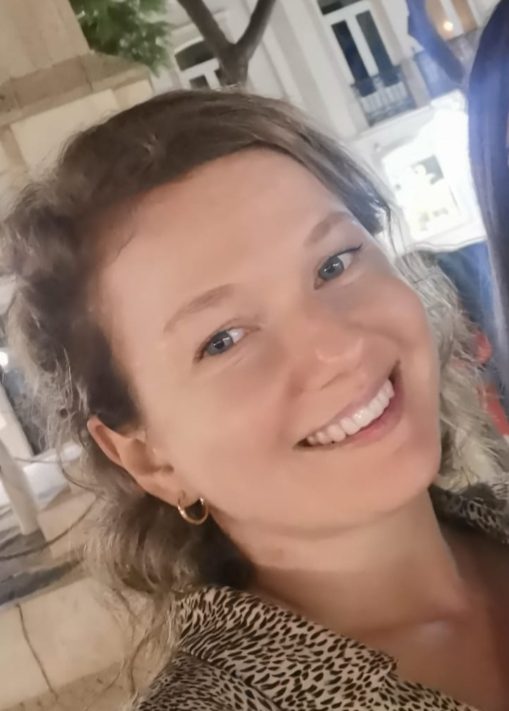 Curstaidh Reid is a Gulf History Cataloguer at the British Library/Qatar Foundation Partnership Programme. Graduating with an MSc in Information Management and Preservation from the University of Glasgow in 2018, she has held cataloguing and project archivist roles at a variety of institutions, including university, local authority and private archives. Her interests include international/bilingual archives, community-based archives, and conscientious description. 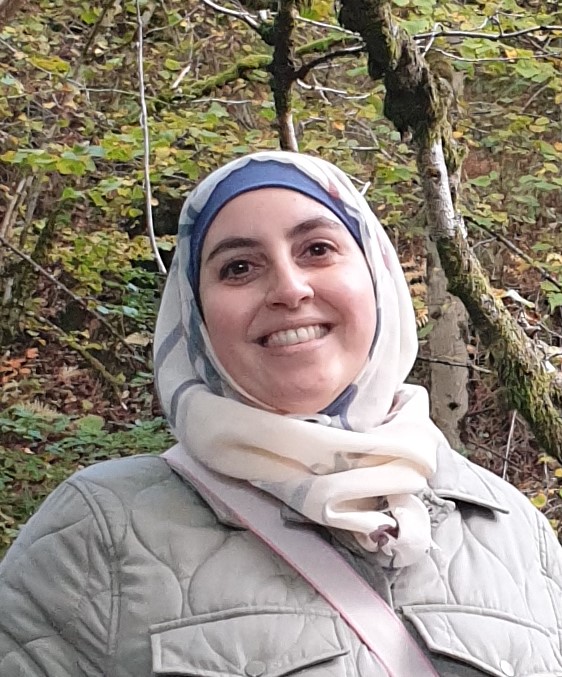 Mariam Aboelezz is a Translation Specialist at the British Library/Qatar Foundation Partnership Programme and a Lecturer (Education) in Arabic Translation at University College London. She is a Chartered Linguist with a PhD in Linguistics and MA in Language Studies from Lancaster University. Her research mainly relates to language politics and language ideologies in the Arab World.