Archives ‘on the go’: ‘What Was Here?’ uses technology to bring content from the ‘research room’ into the wider world, for self-directed exploration. 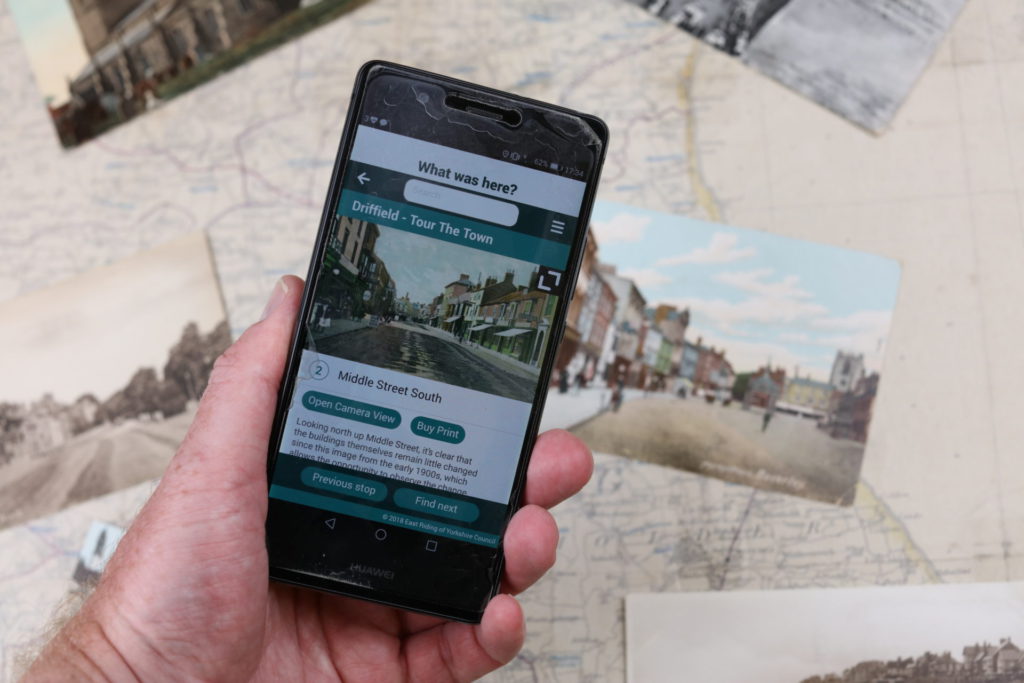 In June 2019, the East Riding Archives (Beverley, East Yorkshire, England) officially launched its new app, called ‘What Was Here?’. This marked the culmination of a 4-year journey in which we had sought to find new ways of engaging audiences with archives in a digital age.

It was June 2015 when I first conceived the idea for a mobile app that allows people to view what a place looked like, while stood in that location, using archive photographs.  I was on my way to work when I passed a beautiful meadow and recognised it as the location of an image from our collections, which featured some buildings that are no longer standing.  Immediately, I thought not many people will realise ‘what was here’ and, in that moment, with smartphone in hand, an idea was born.

Generally, if someone is interested in viewing material preserved in an archive it is necessary to either visit in person or request that copies be posted or emailed.  Whilst some items may be online, it can sometimes take diligent research to identify relevant web resources and items of interest.  This arguably creates barriers to access, primarily physical, but also cognitive, that can cause archival material to be the preserve of the discerning researcher and preclude many from ever seeing historic items they would otherwise have found fascinating.  One of the key drivers of ‘What Was Here?’ has always been to remove those barriers and appeal to broader audiences on the premise that we have a fundamental curiosity about the past, which makes archives relevant to everyone.

The ‘What Was Here?’ app involves archive photographs plotted onto a Google Maps base map, allowing users to go and explore points of interest and compare past with present by viewing the historic image from where it was taken.  This self-directed exploration element is combined with guided heritage trails that include route maps, directions, and GPS push notifications.  An augmented reality feature in trails, called ‘Camera View’, generates an enhanced comparative experience by using the device camera to overlay and align the historic image with the modern scene and toggle the transparency with a slider. If users are particularly fond of an image they also have an option to ‘Buy Prints’, linking back to our e-commerce website ‘East Riding Photos’ (www.picturearchives.org/eastridingphotos) and so facilitating the purchase of copies of archival content as gifts, souvenirs, or wall décor for local businesses.  The platform intentionally supports a range of potential uses including tourism, education, family history, exercise, reminiscence, or simply general interest.  Having a commercial offer available is also important to the user experience as it enhances engagement and sense of ownership.

The photographic element marks Phase 1 of the app’s rollout, with Phase 2 currently in development.  This 2nd phase focuses on historic maps overlaid onto the base map in layers of ‘time’ according to date e.g. 1700s, 1800s and is again based on the use of a transparency slider to phase between the past and present for instant visual comparison.

From the outset, my concept has been to provide access via a base map, with archive items geo-referenced onto it.  Historic photographs and maps were earmarked as baseline content because I felt these lent themselves most readily to the geo-referencing aspect and intuitively believed them to be most popular with mainstream audiences.

One of the key challenges was identifying suitable photographs with no known copyright restrictions and plotting their coordinates.  This was achieved with over 1400 images across the East Yorkshire region. Obviously, it is not possible to be 100% accurate with every image, which is partly why a ‘Contribute’ feature was added to the platform, allowing users to make suggestions for refinement to the map coordinates.  This should also allow us to tap into the rich photographic collections of private individuals by encouraging the donation of their material.  Alongside the photographic content, the proposed method of presenting archival maps has produced the most significant developmental challenge as the source material is high resolution and data-heavy, so needs to be condensed and packaged in a user-friendly manner.  Once this work is complete it promises an exciting new way of accessing maps from the Archives.

The process of moving from concept to development, and finally to delivery has taken four years, the first three of which were spent in convincing stakeholders that my concept was a viable solution.  Our Archives service operates within a local government setting, where budgets are often constrained, so a rigorous procedure was followed in order to win corporate approval, before any consideration could be given to procurement and development.  This was a test of my persistence and belief in the concept, but in this digital age, where access to information is driven by engagement with apps and the internet, I consider it reticent for an archive not to have the means of engaging users digitally.  It was the belief that this was vital for service provision, as much as my passion for the concept, that saw this project through to its fruition.

The ‘What Was Here?’ concept appeals to our fundamental curiosity about the past and its relationship with our surroundings, placing archives at the centre of that user experience.  However, as with any digital innovation, the level of public awareness of the app’s availability is vital to its success.  In its first six weeks, the ‘What Was Here?’ app received over 1000 downloads on Play Store (Android) in which it trended at No.10 in the ‘Travel & Local’ category, placing it above some major commercial apps.  This is an encouraging start, providing affirmation that the concept has popular appeal, and statistics from the App Store (iOS) have yet to be added to this figure.  In relative terms, the marketing has been on a low budget, and small scale, so with future plans for increasing the promotion it is anticipated that growth in uptake could follow.  My hope is that historic photographs and maps will help the app to gain traction with a mainstream audience and allow for a diverse range of archival content to be hosted on the platform, including audio and video, with other heritage organisations getting involved and ultimately expanding the base map.  Enjoyment and learning should be at the heart of the user experience, and it is a pleasure to consider that we are using archives to deliver that to people in the wider world.  Conversely, the ‘What Was Here?’ app is merely the tip of the iceberg in terms of archival content held in the repository, so it should also act as a useful advertisement, pointing people towards resource availability in the research room.  With this technology, we now have the ability and opportunity to transform how people engage with archives, creating a mainstream tool for learning and exploration.

‘What Was Here?’ is available to download free on Google Play and the App Store (search ‘what was here’).  For more information, visit https://www.eastridingarchives.co.uk/archives-online/