“We are heirs to all these protest movements that have not happened in a vacuum, but rather are part of a history we’ve been making since 1898.”: Interview with Marisol Ramos, Joel Blanco Rivera, and Irmarie Fraticelli Ramos of the RickyRenuncia Project. (Part II)

Click here to read the first part of the interview with the RickyRenuncia Project.

(AE) You use Scalar as a platform for the website. What were the reasons you chose it? And, in general, terms, what should initiatives and projects have in mind when selecting archiving, access and preservation tools for digital materials?

(JBR) I was working with other colleagues from the University of Puerto Rico, who were working on the Diáspora project. This initiative involved documenting migration in Puerto Rico and the rest of the Antilles within the context of carnival. It was from that project that I came to know about Scalar. It’s a platform developed by a university for digital humanities, digital stewardship and publishing projects. It gives you various alternatives for interactivity and ways of presenting information. It’s not a static website, and I have to say it, it is free.

Because our project was spontaneous and we had no institutional support, we decided to go with Scalar. We saw what the platform had to offer and used the main page as a hub, which could link out to the Twitter web archive. We also used other tools such as timelines and map stories to document the protests happening all over the world. Like every platform, it has its pros and cons. Scalar is a platform for diffusion, not for preservation, so the other thing we had in mind was what to do in order to preserve the content. We’re speaking with the Digital Library of the Caribbean to see if the materials that we are compiling can become part of their collection.

(MR) What is called in english “open-source” has good and bad aspects. The good aspect is the cost, but at the same time you need someone who has the skills to make customizations. It’s like Joel said, the first thing you have to ask yourself is what is the story you want to present, what elements are you able to coordinate, and what is the tool that can help you achieve that. Also, you have to make a lot of decisions before landing on a tool. Because if you start without a purpose, you end up making a mess and people abandon the project. That’s the reason why a lot of projects start and then die, because people don’t plan for the long term. I knew that we would eventually need to move the project from a free user account to one where we had to pay to have more control over the assets and customization. We started using ‘Reclaim Hosting’, which supports universities on digital projects through a subscription process. It was clear from the beginning that we would have to move in that direction and work with someone with the technical skills to adjust and make any necessary changes on the web portal.

(AE) Cataloging of the webpages was done mainly by volunteers, apart from being able to complete tasks more quickly with a larger team, what is the benefit of this type of crowdsourcing?

(MR) It’s an opportunity to gain hands-on experience on a project that has a real impact on society. Especially for students who are in library or archival studies programs. For example, Joel created manuals to instruct people on how to find information and we also credit volunteers as being part of the project ‘s team. This didn’t happen because we’re doing everything, this was a collaboration and it’s also a reflection of what we’re documenting.

(JBR) It creates a community of librarians and archivists who are interested in contributing and collaborating. It creates an important community based on helping each other and being part of a larger documentary process.

(AE) What do you hope will be the reception of this collection in Puerto Rico?

(MR) Until now all the reactions have been through Facebook or Twitter, where people have been getting in touch to donate or to support the initiative. My hope is to keep growing this website as the idea is to collect materials to donate to the University of Florida. The reality is that, as much as we like our Scalar project, these digital projects have a cycle and eventually there will come a time when the site won’t make sense anymore or where we reach the point of achieving what we set out to do.

We’d like for the collection to be a starting point for researchers, so that people may study and reflect on what it meant to be Puerto Rican during this specific time, both on the island and abroad. We’re not trying to be the RickyRenuncia experts, but we’d like to be a model that inspires people to create their own documentation projects.

(IFR) The archives and library community in Puerto Rico have given us a lovely welcome and I’ve received emails from our colleagues in the Diáspora project inviting others to donate materials. I hope these materials are used and for our project to be a tool for researchers and students in other fields and academic communities. 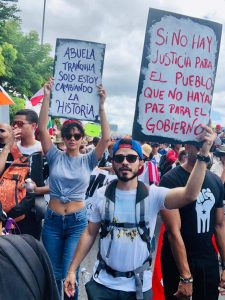 (JBR) We see this as the conclusion of the first phase. And the second phase is the most important as it’s focused on calling on those who want to donate their photos, videos, and ephemera. I also think the next step is to connect what happened with RickyRenuncia to a wider social context. The RickyRenuncia anniversary came and went without much celebration due to the situation we’re all living in right now. But that doesn’t mean that people will forget, and the fact that we’re still documenting opens up the possibility of that memory being continually activated.

(AE) Is there anything else you’d like to add?

(MR) In relation to the first anniversary of the protests, I went to a conference where we were collectively reflecting on the protests and what they ultimately meant. I announced that we were about to launch this project and the reaction was really positive. Precisely because we will be part of a collective reflection of what it means to be Puerto Rican. How do you define Puerto Rican identity within and outside the island? What is the sense of solidarity between both experiences? I see our project as a part of these greater conversations.

(MR) There are people who ask why we haven’t done a similar initiative with other events such as Hurricane María and the earthquakes. Firstly, there are already other people doing that work and for me, the RickyReuncia protests represent one of the few positive things that have come out of Puerto Rico and that doesn’t portray Puerto Ricans as victims. That has been one of the main narratives by the media in Puerto Rico as in the United States and worldwide. What took place last summer reinforces the idea that we as Puerto Ricans are not victims but survivors. The protests of RickyRenuncia come from the social movements of Vieques, student-led strikes and protests and of la Telefónica. We are heirs to all these protest movements that have not happened in a vacuum, but rather are part of a history we’ve been making since 1898. This is not a spontaneous event but a continuation and it’s important to remind people that we have the capacity to control our own future and continue to move forward. When we started this initiative, we had no idea we would eventually have funds from the University of Connecticut to pay programmers nor that we would be grantees of an IMLS grant. I believe this is the beginning of many new things and we are three Puerto Ricans who know each other from the University of Puerto Rico and spontaneously came together. If we can continue to inspire people to see that in actuality you do not need much money to start a similar project, well here we are.

Header image: List of most popular hashtags collected by TWARC.