“The rate of change in the digital era is constant and ongoing…” Interview with Simon Smith, National Film and Sound Archive of Australia 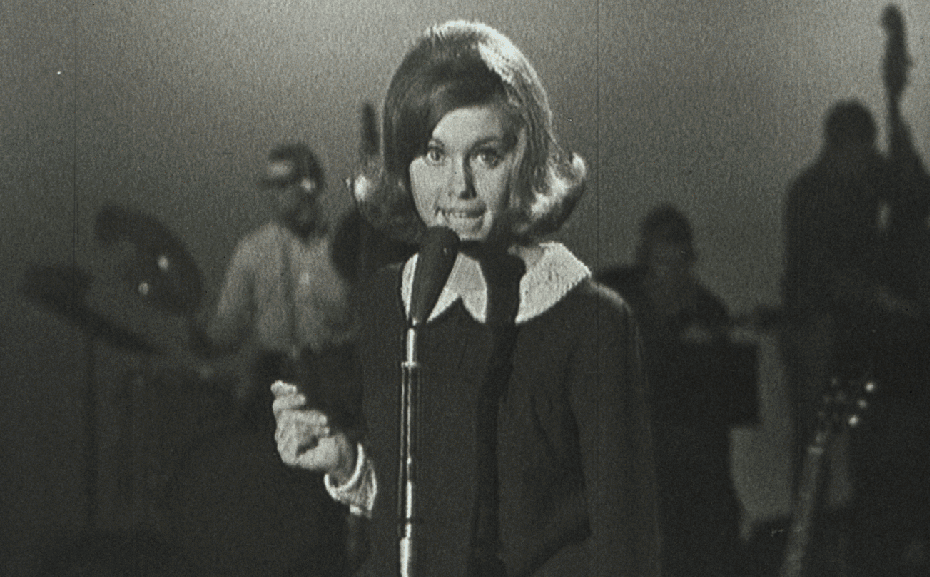 Established in 1984, the National Film and Sound Archive (NFSA) is Australia’s premier audiovisual archive, holding more than 3 million works, including films, sound recordings, television and radio programs in a variety of formats.

Archivoz’s Evanthia Samaras met with Simon Smith, an audiovisual archivist with 20 years’ experience at the NFSA to learn about their broadcast collection.

(Archivoz) To start, can you please describe your role at the NFSA?

Simon Smith (SS) I’m a Senior Curatorial Officer of Television within the Broadcast Team. My main role at present is managing contemporary television deliverables. If you’re wondering what deliverables are… because there’s no legal deposit fulfillment for these materials in Australia… we work with government screen agencies to ensure that when a filmmaker, producer or a production company obtains government funding, upon completion, they have to deliver a master and documentation (press kit, images, scripts, music cue sheet, available behind-the-scenes extras, etc.) of their latest television series production to the NFSA. I’d say, perhaps half of my working week is dealing with television deliverables.

I also liaise with the independent television production company sector, companies like Fremantle Australia, Endemol Shine Australia and Screentime, to negotiate the NFSA acquiring their back catalogue titles. I also deal with reactive requests—such as when a producer is cleaning out their vaults or when collectors and industry want to donate their collections. There are also requirements to research, write blogs, provide input into preservation queues, assist in curating online exhibitions, develop screening events and undertake publicity when we are promoting aspects of our collection.

It’s a diverse role, and with my interest in modern history and in our incredible collection, one I continually enjoy.

(Archivoz) What are the biggest challenges you face in your role?

(SS) So, there’s an ‘Analogue Avalanche’ and then we’ve also got the ‘Digital Deluge’.

For the last five to eight years, there’s been a real push for the production sector to offer us their magnetic tape holdings. Many production company collections have been residing in long term storage, and for some of their backlog titles, decisions are being made as to whether they need be retained. Thankfully, with our existing relationships with the sector, companies will frequently check in with us first as to whether we hold their works before potentially disposing of materials. So, we’ve been receiving lots of analogue collections in recent times.

We are also receiving quite a lot of material now, which is born digital. I think every archive in the world is struggling with the issue of: how do we deal with this digital deluge? There’s just so much coming in. One hard drive could have 1000s of TV episodes. We had an example recently with community broadcaster Channel 31, which sent through one hard drive with 1400 episodes, covering about 40 series. If that had been an analogue collection, it would have been, you know, pallets of material. The rate of change in the digital era is constant and ongoing.

(Archivoz) What would be the characteristics you feel distinguishes Australian broadcasting material from other overseas television content?

(SS) Australia historically has been more aligned with free-to-air television, whereas America has had cable for decades. Cable television allows a bit more niche programming where it targets particular markets, whereas I think free-to-air television in Australia, particularly the commercial networks have always tried to find the biggest audience. They’ve had to be broadest in appeal, broadest in scope. You could say they have to be somewhat risk averse by necessity. Australian commercial television was maybe riskier in the 70s when you had shows like ‘Number 96′ and ‘The Norman Gunston Show’, that sort of pushed the boundaries a bit more.

But with all the new competing media companies and emerging foreign-owned platforms about to enter the Australian market, the idea of a distinguishable Australian broadcasting identity becomes even more difficult to define.

(Archivoz) Now I’d like to turn to another side of your broadcast collection. Could you please explain your news and current affairs collection? Including how you acquire this material?

(SS) Our News and Current Affairs Program, which we call ‘Newscaf’ celebrated its 30th anniversary last year. Since 1988, the aim has been to acquire news bulletins somewhere in the country every week. The NFSA integrates stations around the country on a roster to ensure even coverage. Where there is a big event in a particular region, we endeavour to roster a local station, so we have a record of the coverage of that event. So, for example, the first week of January, could be Channel 10 Brisbane, then the second week could be Nine News Canberra, and so on. The Newscaf team will reach out to the stations in advance to make sure they are available to deliver material to the archive. Basically, there’s relationship management going on with the networks all the time.

(SS) Deadline 2025 was launched in 2015. It’s about raising awareness and funding so that magnetic media formats held in archives are digitised in the near future—before they become lost forever. Film has a lot longer shelf life than magnetic media. Tapes are just not designed to sit on shelves for hundreds of years; the format simply won’t sustain itself like that. 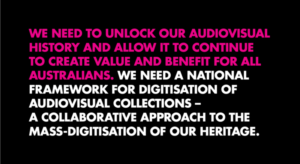 (Archivoz) What are your favourite items in the collection?

(SS) My favourite items tend to relate to my particular areas of interest: music, music television and sport. For example, in the last year, I was working with a collector to find an episode of a show called Boomeride. It was an ambitious 1965 music TV show made here in Melbourne, which no one remembers and only ran for 13 episodes. I had heard that Olivia Newton-John was in one of the episodes, though she was not guest-listed in program guides, and of the two episodes we held in the collection, she wasn’t in either. So, I contacted this local collector known to have the Olivia episode, and after some negotiation, he generously provided us with the surviving 16mm tele-recorded film copy. It’s a significant find and a recent favourite, because it’s one of the earliest surviving live performances by Olivia—with songs that no one has ever heard before. Olivia herself was also really happy when she was told about it!

(Archivoz) Is there anything that’s been kind of strange or unusual in the collection that you’ve encountered in your many years here?

(SS) It’s not TV-related, but we’ve got a little flip book from 1897 that has images from the Melbourne Cup. We digitised each tiny individual image and stabilised it into a videoclip, which ran for three seconds. But what we found out, when we compared the flip book footage to our original film of the 1897 Melbourne Cup—they didn’t match! They were different horses! It turns out, the film in our collection we thought was the 1897 Melbourne Cup, was actually a different race!

Special thanks to Simon for sharing such great insights and archival knowledge with Archivoz and our readers.

For more information about the National Film and Sound Archive, please visit their website. Also see their online articles, of which Simon is a regular contributor.