The Polonsky Foundation England and France Project: Manuscripts from the British Library and the Bibliothèque Nationale de France, 700–1200

In November 2018, the British Library and the Bibliothèque Nationale de France launched two new websites that offer access to digitised copies of medieval manuscripts. The two libraries worked together to digitise 800 illuminated manuscripts from the period 700–1200, sharing them online for the first time.

The project focused on manuscripts produced on either side of the English Channel over half a millennium of close cultural and political interaction. These 800 manuscripts were selected to build on existing digitised manuscript collections, based on their artistic merit, research value and wider public interest. The project manuscripts comprise a wide range of texts, including liturgical, biblical and theological works, and legal and scientific treatises that reflect the interest of monks, abbots and clerics, who were responsible for much of book production in the period before 1200.

The project drew upon the expertise of curators, cataloguers, conservators and imaging specialists from both institutions, who have learned from one another through a programme of knowledge exchange and reciprocal visits. Each manuscript was checked by a conservator before it was filmed, and any necessary preservation work was performed, to ensure that all manuscripts could be digitised safely. All the manuscripts have been newly catalogued to include up-to-date bibliography, the identification of texts and descriptions of the artwork. These descriptions can be viewed on Explore our Archives and Manuscripts for British Library manuscripts; and on Archives et manuscrits for Bibliothèque Nationale de France manuscripts. 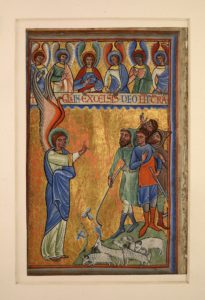 In November, the libraries launched two innovative websites that complement each other. Using the International Image Interoperability Framework (IIIF) technology, the Bibliothèque Nationale de France hosts a site, France et Angleterre: manuscripts médiévaux entre 700 et 1200, that allows side-by-side comparison of 400 manuscripts from each collection. This new website will enable users to search the manuscripts in English, French and Italian, and to annotate and download images.

The second website, hosted by the British Library is a bilingual online resource, Medieval England and France, 700–1200, that presents a curated view to the project manuscripts in English and French. The site features over 140 manuscript highlights from some of the most important of these manuscripts. It includes 30 articles on a wide range of themes, including medieval science, manuscript illumination and the development of vernacular languages; as well as discussions of prominent figures from the period, such as Thomas Becket, Hrabanus Maurus and Anselm of Canterbury. The site also features a series of videos, narrated by Patricia Lovett MBE, detailing the stages of making a medieval manuscript; two interviews with Professors Julia Crick (King’s College London) and  Nicholas Vincent (University of East Anglia) about manuscript production during the period; and an animation inspired by a medieval bestiary (British Library, Harley MS 4751).

Highlights now available online include the lavishly illuminated Winchester Benedictional, created around the year 1000, as well as the 12th-century collection of St Thomas Becket’s letters, including the earliest depiction of Becket’s martyrdom. There are exquisite Anglo-Saxon manuscripts from the centuries before the Norman Conquest of 1066 that include Psalters, saints’ lives and Gospel-books, and spectacular manuscripts in the Romanesque style, including the giant two-volume Chartres Bible (12th century). The magnificent Canterbury Psalter (12th century), with a tri-lingual translation of the Psalms in Latin, French and English, was made in Canterbury. The book is sometimes known as the Anglo-Catalan Psalter because some of its illustrations were left unfinished and were completed several centuries later in Catalonia
This exciting project was made possible by a generous grant from The Polonsky Foundation. Dr Leonard Polonsky commented that:

“This project brings together riches of the Bibliothèque Nationale de France and the British Library and makes them available to researchers and the broader public in innovative and attractive ways. Our Foundation is privileged to support this collaboration, which continues the cultural exchange and profound mutual influence that characterises the history of these two nations over many centuries.”

The Polonsky Foundation is a UK-registered charity that supports cultural heritage, scholarship in the humanities and social sciences, and innovation in higher education and the arts.