“The legacy of elBulli is bursting with interdisciplinary potential”: Interview with Ferran Adrià 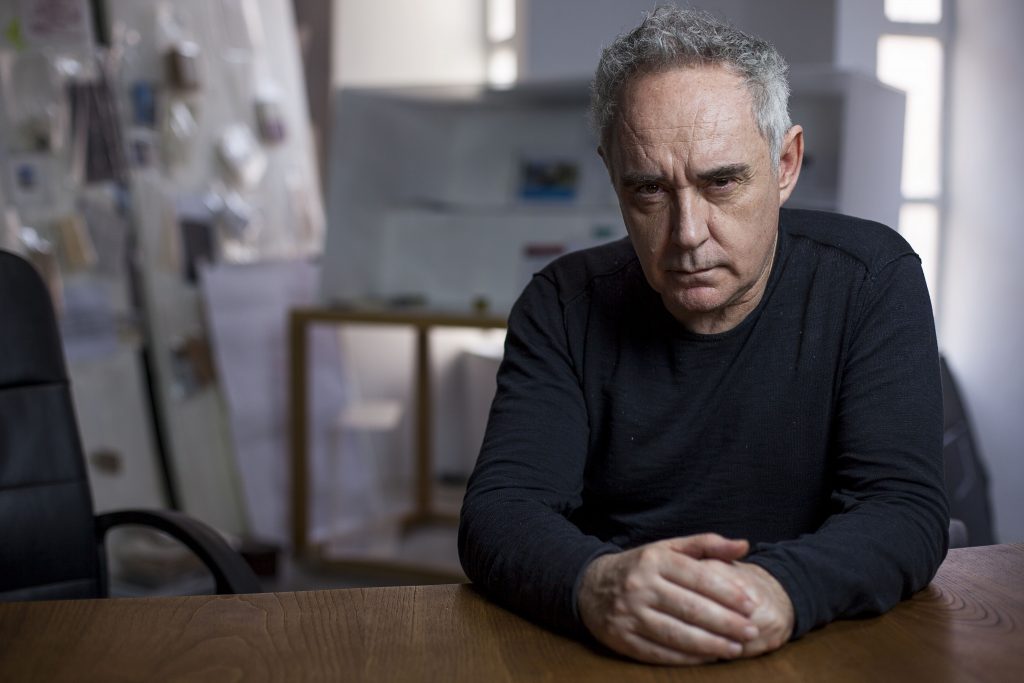 Today, in Archivoz Magazine, we talk about a project, still under development, which proposes a new form of documentary dissemination, merging the conceptual limits of libraries, archives and museums. This project is of interest not only because of its approach, but also due to the identity of its designer: Ferran Adrià.

Ferran Adrià is a Spanish chef, best known for his time as head chef of the restaurant elBulli, in Roses, Spain, which garnered 3 Michelin stars. He is associated with molecular gastronomy, although he himself has referred to his style as “deconstructionist.” After elBulli closed in 2011, Adrià reopened it in 2014 as a”creativity center”–elBulliLab–basically a culinary think tank and laboratory for experimental chefs in his own vein.¹

(Archivoz) LABulligrafia is an ambitious project that began in 2017 under the name “elBulliLab.” It was conceived as a combination library, archive, and museum about elBulli. Can you tell us about the origin of this idea and how it has evolved?

(Ferrán Adriá) This project was born out of elBullifoundation and supports one of its main goals, which is to safeguard the legacy of elBullirestaurant, both in terms of the space in Cala Montjoi where the original restaurant was located–now known as elBulli1846–as well as our entire archival collection.

(Archivoz) Part of the materials that make up LABulligrafia represent documentation generated by the restaurant El Bulli. What other materials are included in this archive? Is it an open archive, i.e. does it continue to take on new accessions?

(FA) The archive consists of hundreds of thousands of documents and artifacts that allow us to showcase our accumulated expertise. These were generated both during the evolution of elBullirestaurant and as part of all the projects that developed around it. These records–for example, the notebooks kept by the original creative team, in both physical and digital formats–are of immense value for understanding how elBullirestaurant altered the paradigm of our discipline.

(Archivoz) LABulligrafia is made up of both online and offline formats. What differences are there between the two? Is each intended as complementary to the other, or are you simply presenting the same project in two different ways?

(FA) The offline portion is an exhibition designed within a physical space according to a timeline that allows us to understand our legacy, while the digital portion is designed to allow for more in-depth study of our archives, given the infinite variety of available documentation and its relevance to a number of avenues of research. But the two models have the same taxonomic structure.

(Archivoz) Focusing on the offline portion, do you have a site in mind? Are you thinking of a new building or a refurbished building? Explain to us what sort of physical space you envision.

(FA) My first preference would be to locate it in Hospitalet de Llobregat, the city where I was born, and to use a refurbished space, but at the moment nothing has been completely decided. As for the exhibition itself, it is conceived as an interpretive journey, via artifacts and documentation, through the historical trajectory of elBulli.

(Archivoz) It is not always as easy mounting exhibitions based on documents as it is when dealing with artifacts such as paintings or sculptures. The possibility exists that the message you seek to transmit via the exhibition will not be well understood. What sort of dialogue do you want to create between the documents and other sorts of artifacts featured in LABulligrafia?

(FA) The narrative we seek to establish in the exhibition springs from a creative audit of elBulliRestaurant, and is based on the general catalogue of our work. We are currently conducting an exhaustive study at elBulli1846 that has us totally focused on Cala Montjoi.

(Archivoz) Let’s talk about the online side of LABulligrafia. It will house the catalogue raisonné of elBulli’s works. Do you plan to digitize the entire archive? How will the virtual exhibit be designed?

(FA) As I said before, we have based the classification of the materials, both on- and offline, on identical taxonomic categories based on a creative audit of elBulliRestaurant carried out according to the so-called Sapiens Methodology, which has been developed by elBullifoundation over the last few years.

(Archivoz) What is the Sapiens Methodology, and how does it relate to the management of the elBulli archive?

(FA) The Sapiens Methodology sprang from our need to systematize our own questions and, by doing so, to facilitate understanding of the world of gastronomy. Initially, it wasn’t our objective to create a methodology as such. Only later did we realize its strong interdisciplinary potential.

Sapiens is a research methodology based on a holistic and systematic vision. It sees all things as connected, and it combines systems theory and systemic thinking with historical sensibility. Like any research methodology, it is a tool that can be applied to any field of knowledge in the interests of understanding it better. Therefore, from a systems point of view, Sapiens seeks to illuminate the process of understanding from inside the very system upon which its seeks to shed light.

The Sapiens Methodology combines philosophical principle with practical technique. The specifics of these techniques and tools will vary according to the subject at hand, as some researchers will need to delve more deeply into one type of knowledge while others will focus on another, and few will likely require all the types of knowledge that are envisaged at once. It is a flexible methodology, and the details of its application must be defined for each individual investigation.

Its application generates a concrete result that can be a physical or digital archive, academic work such as a final degree or doctoral thesis, educational material, content in different formats such as books or exhibitions, corporate project reports, organizational or operational audits, or the generation of new creative ideas leading to innovation in particular fields.

The ultimate goal can be either the management of information or learning, but it can also be aimed toward a range of outcomes, from teaching and communication, contextual analysis, corporate analysis, evaluations of corporate efficiency and quality control, to creation and innovation. All of this begins with an in-depth understanding of the subject matter involved.

Initially, Sapiens was developed as a tool for research on gastronomic restoration; as such, it gave rise to Bullipedia. However, our plan is to generalize its application to enhance its relevance to any field, sector, organization, project, product, or service.

(Archivoz) Within any cultural management project there is always a section dedicated to the project’s target audience. In the case of LABulligrafia, what is your target audience? Your potential audience?

(FA) Ours is a project aimed at all lovers of gastronomy and, of course, at all professionals in our field. Given that the legacy of elBulli is bursting with interdisciplinary potential and contains elements that can be brought to bear on other fields of study, the audience could potentially include anyone, whether or not they are directly involved in the areas of cuisine or gastronomic restoration. For this reason, ours is a project that seeks to capture the attention of anyone who is interested in innovation.

(Archivoz) LABulligrafia is a reality, but it is still a project in the development phase. When do you expect the project to be completed? How has COVID-19 affected its development?

(FA) Our target at this point is 2025; right now we are totally focused on the launch of elBulli1846 in Cala Montjoi, in the same space in which the restaurant was originally located. It is intended as a laboratory which will blend the ideas of interpretation and research through the work carried out by multidisciplinary teams formed in response to a series of calls for proposals that we will issue. This work will allow us to fulfill the various mandates of elBullifoundation: safeguarding the legacy of elBulli and its physical space, generating quality content in service of gastronomic restoration, and sharing our expertise in management and innovation.

Notwithstanding the dedication with which we have undertaken this project, which is of the utmost importance to the foundation, the current context of pandemic, which has obstructed and conditioned the personal and professional lives of people the world over, has inevitably delayed our development timeline, which now awaits reactivation, hopefully very soon.

(Archivoz) Finally, what is it that you personally expect from LABulligrafia?

I hope that it will not only allow all interested parties to understand how a restaurant located in a small cove in Roses altered the paradigm of cuisine and gastronomic restoration, but also serve as a resource for study and reflection to anyone seeking to deepen his or her relationship with innovation.