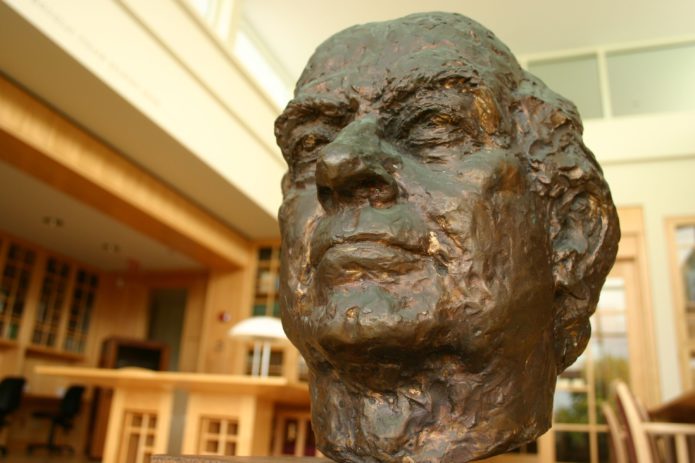 On April 18, 1986, Dr. Linus Pauling (1901-1994), a world historical figure and the only winner of two unshared Nobel Prizes, formally announced his intention to donate his papers, along with those of his wife, to Oregon State University, his undergraduate alma mater. This was a watershed moment, the successful culmination of an outreach effort that began in the early 1960s, spanning the administrations of three university presidents.

It was also a decision that, from a neutral point of view, made little sense. Though one could understand Pauling’s affection for his university, he was surely aware that the institution was ill-equipped to accept a collection of such magnitude. While OSU at that time had been well-served by a university archives for twenty-five years, the unit was part of OSU’s central administration and, for most of its history, had emphasized administrative support activities including employee background checks and records management work. More importantly, OSU had nowhere to put Pauling’s collection, understood by all parties to be massive. Finally, Oregon State was hardly the only interested party: repositories like the Library of Congress, the Smithsonian, and the California Institute of Technology Archives had all expressed strong interest in the materials.

So why did Pauling make this decision? The answer likely has many components. For one Pauling was no stranger to unorthodox thinking and would harbor few qualms about making a decision that might add to his reputation as a maverick. For another, it is indisputable that Oregon Agricultural College – as OSU was known during Pauling’s time – served a critical role in his life by providing a young man of limited means with a route to an advanced education. A romantic point of view suggests that Pauling was persuaded by OSU’s specific request that he deposit the papers of Ava Helen Pauling, his wife of fifty-eight years, alongside his own. Ava Helen had succumbed to stomach cancer in 1981, and for Pauling, an atheist, the idea that his and his wife’s papers might be preserved together was perhaps a means of solidifying their bond in perpetuity. Indeed, Pauling’s request that the collection be titled the Ava Helen and Linus Pauling Papers lends credence to this notion.

It is the author’s belief, however, that Pauling based his decision primarily on OSU’s pledge to dedicate ample resources to the collection. Shortly after Pauling’s 1986 announcement, a Special Collections department was formed within the university’s Kerr Library, with a unit head hired a year later. A modest reading room and storage space were fashioned within the building, and plans were made to expand the entire library. Though Pauling died in 1994, the university leaned on his fame and endorsement to bolster its fundraising efforts. This campaign proved successful: the groundbreaking ceremony for the expanded (and renamed) Valley Library was held in May 1996 and the completed structure was dedicated three years later.

Near the end of Pauling’s life, another decision was made that dramatically impacted the final shape of the collection. Pauling had initially planned to donate only a selection of his papers to OSU. Gradually his eldest son, Linus Pauling Jr., impressed upon his father the need to leave a comprehensive view of his life’s work to future historians, and persuaded him to donate all of his books and papers, rather than a curated subset, to the archive. This decision was formalized in a codicil to Pauling’s will written in September 1993, less than a year before he died.

Between 1986 and 1994, Pauling sent a few thousand items to Corvallis that he judged he would no longer need for his on-going research. Library staff also made multiple trips to his primary home at Big Sur, California to evaluate and collect materials for deposit. After Pauling died, it took about two years to resolve his estate, after which the papers began to make their way to Oregon in greater quantity. Finally, in 1999, the full volume of raw material that would eventually comprise the Pauling Papers came under one roof in the refurbished Valley Library. This moment marked the first time that the Pauling Papers had ever existed as a discrete collection in a single spot, since items had flowed to the library from numerous locations, including Pauling’s multiple residences, the offices of the Linus Pauling Institute of Science and Medicine, and the homes of his four children.

Efforts to arrange and describe the Pauling Papers began in 1987, and a preliminary catalog was published in 1991 to mark Pauling’s ninetieth birthday. In 2006, the completed Pauling Catalogue was published: six volumes in length, the catalogue guides researchers in their use of a collection occupying more than 4,400 linear feet (or 0.8 miles) of shelf space. In addition to the manuscripts, correspondence, photographs and article reprints that one might expect to find in an archival collection, the Pauling Papers also feature the contents of Pauling’s personal safe, his forty-six scientific research notebooks, more than 2,400 scrapbook leaves and 4,800 additional newspaper clippings, as well as beard clippings from the 1930s and a molecular model built out of blue plastic fish. Hundreds of awards are cataloged in the collection as well, including all forty-seven of Pauling’s honorary doctorates and, of course, his two Nobel Prizes, without doubt the most frequently accessed items held in MSS Pauling.

Alongside the cataloging effort, Special Collections also spearheaded an ambitious and multifaceted digitization program, including the publication of contextualized documentary history narratives exploring specific themes of Pauling’s career. The first in this series focused on Pauling’s connection to the “race for DNA” and was launched to commemorate the fiftieth anniversary of Watson and Crick’s elucidation of the double helix in February 1953. Later installments examined Pauling’s breakthroughs, and occasional stumbles, in structural chemistry, protein chemistry, and peace work. An additional project explored the scientific war work that Pauling conducted for the U.S. government during World War II. Linus Pauling Day-by-Day mines the papers to document every single day of Pauling’s life from 1930 to 1969, while the Pauling Blog, created in 2008, continues Pauling’s story through new contributions of original research.

In 2011 the Special Collections department and the University Archives merged to form the Special Collections and Archives Research Center (SCARC). This organizational restructuring led to a decrease in emphasis on the Pauling Papers, but the collection continues to loom large over many of the department’s activities. In 2018 components of MSS Pauling were circulated to reading room patrons 338 times, a total that is 80 circulations higher than the next nine most frequently used collections combined. The Pauling web presence – which consists of over 130,000 html pages – accounted for more than 46% of all web traffic recorded within the SCARC domain during that same period. And since 2011, close to 200 presentations on the Pauling Papers have been delivered to outside groups visiting the SCARC facility. One hopes that Dr. Pauling, some thirty-three years later, would learn of this and smile, confident in his understanding that OSU continues to make good on a promise once made to its most distinguished alum.