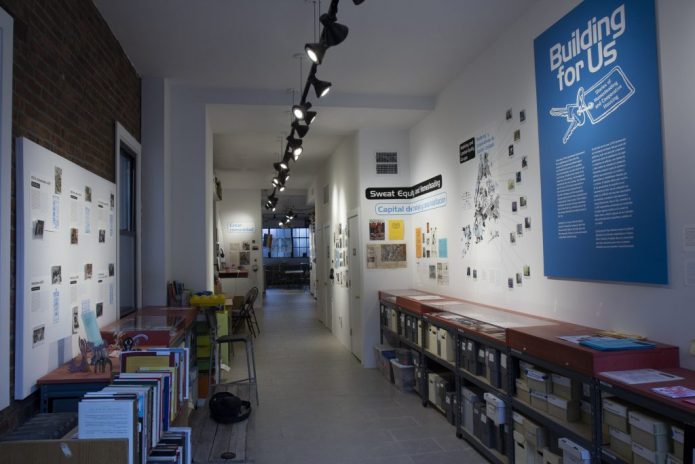 “The way that I wanted to contribute to social justice organizing was by doing memory work”:Interview with Maggie Schreiner, Manager of Archives and Special Collections at the Brooklyn Historical Society

We had the pleasure of speaking with Maggie Schreiner, Manager of Archives and Special Collections at the Brooklyn Historical Society and volunteer at the Interference Archives. Read on to learn how she focuses on supporting movements for racial and economic justice through liberatory memory work, and documenting community history through collaborative and post-custodial approaches.

(Archivoz) You have a background related to activism and social justice organizing. Can you talk about how this led you to becoming an archivist?

Before moving to New York, I was living in Montréal where I was a community organizer and very active in the anarchist scene there. The direct connection to archives started while I was an undergrad at McGill and volunteering at Midnight Kitchen, which was an all-volunteer community kitchen. We did a lot of work to contextualize food security issues within the context of how food distribution happens under capitalism and the ways in which different kinds of access to resources impact people’s ability to have secure food. We were also doing a lot of work related to the campus administration in relation to food production and the privatization of food. The administration at McGill was trying to move away from having independent small vendors to having a conglomerate food service provider, who had significant ties to the military and prison industrial complexes. We knew that in the late 90s there had been a big campaign against Coca-Cola on campus but we knew nothing about it. That’s sort of where my interest in doing memory work around social justice organizing first came up. I did a lot of research and wrote a feature article for the campus newspaper and did teach-ins about the connections between food and the history of our campus organizing. I became the person who was documenting this movement and that led me to realize that the way that I wanted to contribute to social justice organizing was doing this memory work (although at that time I don’t think I even knew that being an archivist was something that one could be). I then moved to New York and entered the New York University (NYU) Archives and Public History Program. I was actually doing the Public History track but then I got a job at Tamiment Library & Robert F. Wagner Labor Archives, which was obviously a great fit for me in terms of documenting left-wing and radical organizing. That’s when I really realized that I wanted to work in archives.

(Archivoz) Speaking of left-wing and radical organizing records, can you tell us about the Interference Archive and your role there?

(MS) The Interference Archive is an all-volunteer archive that documents the cultural production of social movements. We collect posters, newsletter, zines, flyers… really anything that’s created by or for social justice organizing. We consider ourselves to be a cross-movement space and try to be a place where community organizers intersect and learn from each other. I got involved around 2012 in a low-key way by helping out in events once in a while. We do about three to four exhibits a year that focus on different aspects of social justice movements. In 2014 I organized an exhibition titled “We Won’t Move” around the history of tenant organizing in New York City from the 1940s to the present. Essentially, the exhibition tried to contextualize current campaigns for housing rights within historical multi-decade events with a focus on racial and economic justice. That’s how I became deeply involved with Interference. I had a great group of volunteers who did research and worked with about a dozen community organizations across the city so we could articulate their campaign goals in their own words. The exhibition built on my capstone project at NYU, where I worked with the Metropolitan Housing Council, which is the oldest tenant organization in New York City, to research and create an online exhibition about their history. I built out that project to look at the city more broadly and put the work in a physical form. 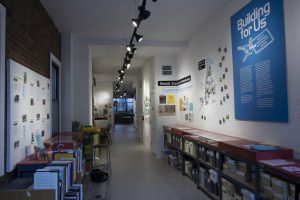 When that project finished I realized that I had to find a new way to remain involved with Interference so I became the volunteer coordinator. But after several years I started to feel like I was burning out on doing that and realized I wanted to transition out of a more administrative role and create more space to be involved in a creative way. So, I worked again with other volunteers on an exhibition that was in partnership with the Urban Homesteading Assistance Board, which supports residents of low-income cooperative housing. It’s one of the biggest permanent affordable housing programs in New York City. We worked with them to tell the history organization and the history of the cooperative housing movement in New York. 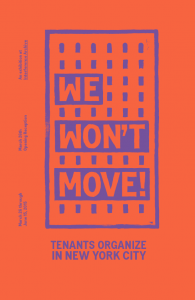 (Archivoz) Are the volunteers mostly people that work in archives or have some sort of archives education?

(MS) It’s a total mix of people. I would say there are people who are archivists or working in some sort of archives-adjacent field and definitely a lot of students. But because Interference has a graphic arts focus, we get a lot of artists and also people who are coming from all different kinds of social movement work. We’re working with really beautiful and engaging materials so Interference is also an obvious point of entry for people who are new to organizing.

(Archivoz) How do you feel about non-archivists doing archives work? Do you think there’s a benefit to that?

(MS) I think that the answer to this looks different for every institution. I definitely come from a place where I would rather engage with people who are non-archivists than be proprietary with the profession. We have aspects of our professional best practices that aren’t applicable across the board, not just for community archives but also for other smaller institutions like the Brooklyn Historical Society. I think that we can learn in both directions and of course there are parts of professional best practices that I would be quite upset if we left aside at any community archive. But, I also think that our practice at Interference has been strengthened by having insights from a variety of places.

(Archivoz) What are some ways in which Interference doesn’t follow so-called best practices for archival materials?

(MS) The most obvious way is that we don’t organize our materials by donor or by a strict understanding of provenance. We organize material by topic and by format because, as a movement organization, we are trying to decenter the individual. Many items in our collections are the result of collaborative creative work so we try to really emphasize the connected nature of these movements.

I also think that we are an incredibly accessible archive. Not so long ago I went to an event and there was a group of teenagers looking at zines. We don’t have a lot of table space at Interference and they were sitting on the floor looking through boxes of zines. In some ways this would be a nightmare for an archivist but I was thinking this was incredible– there was an event happening on one corner, there are teens over in the other corner, and they are stoked about archival material. And that’s why I’m in it.

(Archivoz) On the other hand, the Brooklyn Historical Society (BHS) seems like a more traditional institution that’s housed in a landmarked building and that really looks like the epitome of a traditional library reserved for serious study. This may be an intimidating or uninviting space for somebody that’s not in academia. Is this perception correct?

(MS) BHS is a very traditional archive, more traditional that I would have guessed before I worked there. BHS has a public-facing component that does great historical work and they are committed to, and I think do a good job at, telling the histories of Brooklynites who are normally excluded from the historical record. So I was surprised when I got to the archives and saw that it was pretty much like a traditional academic archive and certainly in a building that can be uninviting to the general public. But I do think that there are some ways in which that is not the whole truth. There’s definitely a commitment to figuring out how to make BHS as an institution more welcoming. Then there is the fact that our user body, while not completely representative of Brooklyn as a whole, is not just composed of academic researchers and that’s really interesting to me. There are tons of people that are coming in to do research about their neighborhoods and buildings and we get a lot of students, not PhD students, but highschoolers and middle schoolers and we also get class visits from local schools. I have found it really interesting to think about being an archivist in terms of serving a non-traditionally academic audience and I really enjoy that.

(Archivoz) How does your activism and community archives experience inform your work as Manager of Archives and Special Collections at BHS?

(MS) I definitely try to think about the collections in a holistic way and really understand where those hidden stories might be. I look at collections that are already processed and think of how we can enhance them to allow access to the stories that are hidden within them. One of my first projects has been trying to get a handle on our audiovisual collection, which for the most part wasn’t digitized. We participated in a program by the Metropolitan New York Library Council called the Studio Internship Project where they funded an intern who worked with their audio-visual digitization equipment. Through that program we achieved intellectual and physical control of our AV materials, which then allowed me to discover that our institutional collections held incredible documentation of activist exhibitions from the 80s and 90s. We were able to digitize video documenting an exhibition on AIDS in Brooklyn from 1993, community housing movements from the early 80s, and one hour of b roll footage from Sunset Park’s Chinese community in the 90s. We’ve also been advocating for use of local subject headings to describe our collections as opposed to solely using Library of Congress Subject Headings. I couldn’t really describe people in our collections without local subject headings. For example we have the Muslims in Brooklyn Oral History Project, which made it clear that Library of Congress is profoundly inadequate when describing Muslim communities. We had a donor who’s collection documented Brooklyn for Peace, an activist group that does a lot of advocacy around Israel-Palestine, so that also made the case for us to adopt local subject headings.

We’re now working with collections that in varying degrees include documentation of indigenous communities in Brooklyn. We’re looking at every collection that makes reference to indigenous materials in order to get a granular understanding of who is represented in each collection in order to create descriptive records that include more detailed information around indigenous communities. I see that as a first step and my dream would be to move forward and seek funding to have a more in-depth partnership with organizations like the Lenape Center to really understand how to ethically store and provide access to these records. We don’t want to approach a community with the state of the records now and say “here’s a hundred things that we think might be relevant but we really don’t know”. Knowing what our collections hold is the first step in seeking more collaborative and informed partnerships with different communities.