Review of the III International Congress on Food Heritage and Museums 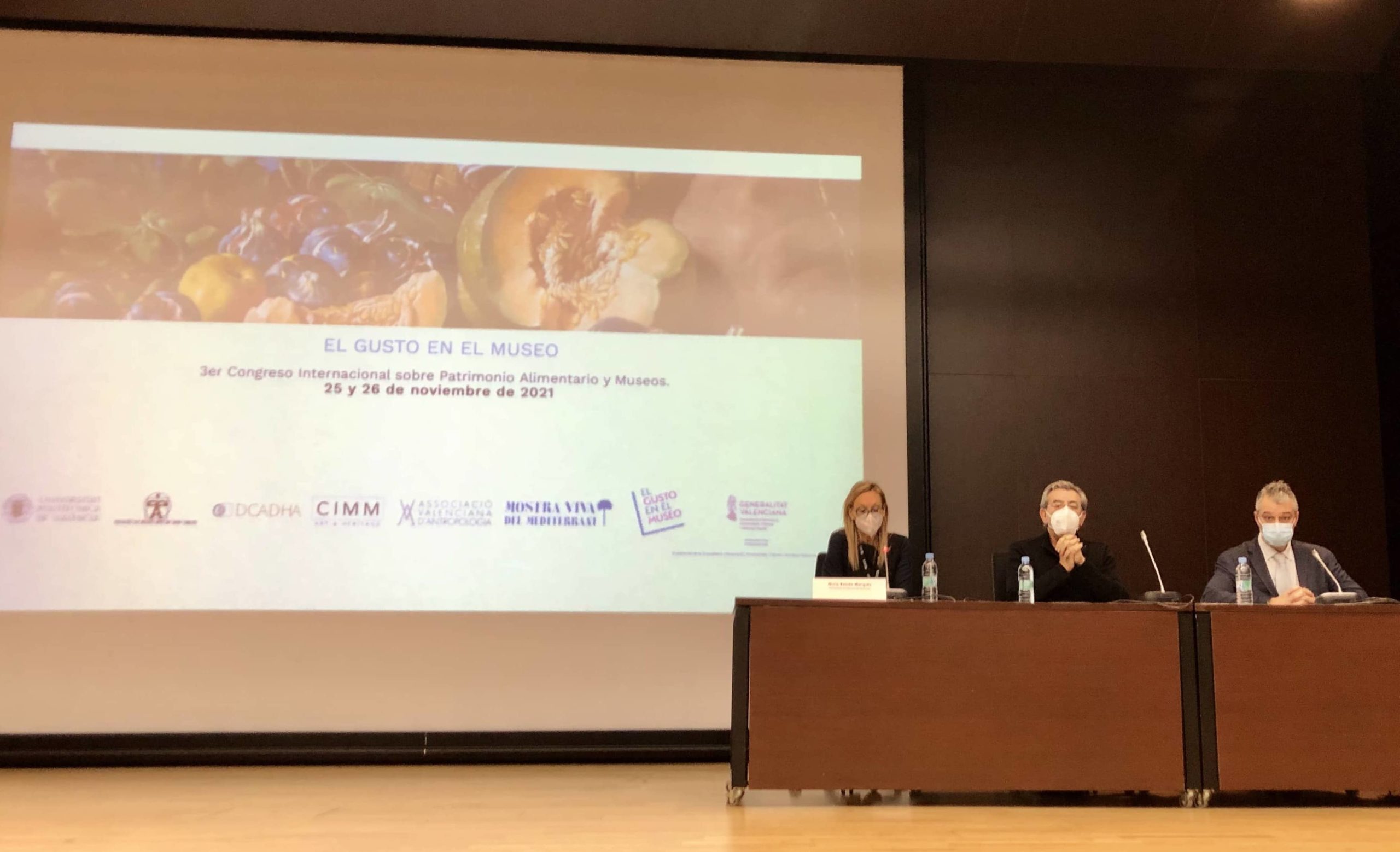 The 3rd International Congress on Food Heritage and Museums, held on November 25 and 26 at the Alfonso Roig Auditorium of the Faculty of Fine Arts of the Polytechnic University of Valencia, had as one of the objectives to highlight the quality of the work of art as a documentary source when we face the study of the history of food. In addition to the purposes of promoting food museums as heritage spaces and highlighting that alimentary patrimony is a vehicle for cultural transmission.

The first cycle of communications was dedicated to talking about works of art as sources of alimentary documentation. It started with a talk by Gerardo Jesús García Olivares, who emphasized the need for Spanish food museums to rely on more visual discourses through works of art to complete their expository speeches. In the case of Marc Millan Rabasa’s presentation, he highlighted the relationship between food heritage and works of art through the study of modern Aragonese salt and spice shakers. These objects are documents of what spices were used in the Modern Age, as well as an expression of the social status of their owners. Then José Fenoll Cascales analysed the panels that Sorolla painted for Rafael Errázuriz as documentary elements of the Greco-Roman culture: classic works of art and archaeological pieces related to the vine, wine, and Bacchus. Underlining that the painter was a scholar, a great connoisseur of Greco-Roman antiquity. On the other hand, the speaker Karla Sandoval Téllez presented a study of the still lifes of Francisco Barrera as a document of the introduction of new foods and as a projection of the status in the houses of their owners. In short, works of art that bear witness to the changes in the Spanish diet. In the case of the speech offered by Francisca Ramón Fernández and María de los Desamparados Soriano Soto, it focused on a pedagogical project that relates food to contemporary art based on what is called “futuristic cuisine”, inspired by the Manifesto of Futuristic Cuisine from 1930. Based on this concept, the speakers develop their discourse by analysing different works of contemporary art from different points of view such as Campbell’s Soup by Warhol, Nedick’s by Estes, Oldenburg’s Flat Burger, Thiebaud’s Cakes, Sparnaay’s Ham and Egg Sandwich or Figure with Meat by Francis Bacon.

This was followed by a couple of presentations where museums dedicated to a specific food become cultural and economic engines of the region. This is the case of the presentations by Luis Miguel Núñez Romero, mayor of Jaraíz de la Vera, explaining the relevance of the Museo del Pimentón de la Vera, or the presentation by Aida San Juan Fernández, where he presents his projects carried out with the company ProaSur in Fuerteventura. These were good examples of how private management can establish a successful administration model in public assets. Closely related is the conference by Xerardo Pereiro, where he highlights the importance of food heritage, describing it as an instrument of social union, cohesion, and collective identification. And a mechanism for the reproduction of social and hegemonic differences, disputes, and conflicts.

To end the first day of the conference, the last communications were dedicated to the relationship between graphic design and alimentation. The illustrator Virginia Lorente spoke of a project that she is developing on the recovery of traditional recipes of Valencian cuisine with the aim of highlighting other dishes of this culinary tradition beyond paella. Maria Isabel Martínez Sosa spoke about how she approaches graphic design assumed as a scientific research process, with visual results through the example of the design of the Congress brand itself. María Fragoso Mora, explained her experience on food illustration, packaging in the publishing world and the characteristics that this type of illustration has. And the day ended with Puri García’s lecture on food design, modifications that occur in food and how the senses affect food design. 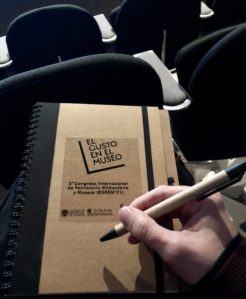 The second day began with Linda Roodenburg’s conference explaining the parts of her virtual museum (FoodMuseum) where she mixes compositions of different types of food and works of art throughout history that serve as graphic document to talk about the history of food.

The following communication cycle was dedicated to the most anthropological aspect of the Food and Museums binomial. David Francisco Torres del Alcázar spoke about the embroidery of the “Pasos de Semana Santa” (catholic processions celebrated on Easter) where fruits such as pomegranates, dates, grapes, or figs appear and what is the specific meaning attributed to them. Diana Roberta Borras Rhodes explained the patrimonializaton of the culinary heritage around the sea. With this, what she aimed to reflect were the social changes in traditional fishing and seafood cuisine. In the case of the talk by Maria Gracia Salvá Picó, she spoke about holding different workshops on her museum by means of the analysis of the history of art through its gastronomy. He highlighted the three workshops held in the museum on medieval history, wine, and chocolate, which led to a notable increase in visitors. Vanesa Quintana Cabello’s presentation consisted of an extract from her doctoral thesis on the introduction of American products in Spain, where she explained the arrival of chocolate in our country and the reactions it aroused through documentation and artistic representations.

Pauline Leclercq’s lecture highlighted the close relationship of the life and work of Toulouse Lautrec with the gastronomic heritage. She illustrated this relationship through both visual documentation (through his paintings and drawings) and written documentation (the artist’s own recipe book).

Another cycle of communications was dedicated to food as a performative element. For this, there was a presentation by the artist Nuria Faba Muñoz whose work has a particular vision of art on food through performance. Javier Leñado González-Páez, dedicated his intervention to the concept of nostalgia in contemporary art, appealing to the Proustian idea of memory through the gastronomic experience and how some current artists reflect it in their works. Gerardo Jesús García Olivares’s communication focused on food within Pedro Almodóvar’s filmography. He highlighted the concept of cuisine as a performative element and at the same time as a symbolic element throughout the films and short films of the Spanish director. Reaching the conclusion that the cinema allows a construction of alimentary ideals of a country.

The last debate of the Conference was dedicated to Art, communication, and culinary creation. Borja Guilló Soler and Marian Tristán Richarte introduced us to the Puçol School Museum and the activities carried out in it to preserve the traditions and ways of doing things in the region. Andrea Ainsa, from a more technological perspective, spoke about how pasta consumption evolves over time and presented the Sea2pasta project of the University of Zaragoza. In the talk by Lucero Liriano Castillo, Maria Isabel Martínez Sosa and Georgina Heliana Batista Schrils present an investigation based on the identification of the profiles of flag-bearers and ambassadors that extol Dominican gastronomy. Regarding the presentation by Maria Desamparadaos Soriano, she presented a vision on the reuse of coconut both in art and as fertilizer for vermicomposting.

To close the congress, there were two conferences that covered the concepts that were discussed in them. Like the representation of food in works of art through Eduardo Barba Gómez’s conference on edible botany at the Prado Museum. Or the museums that use food as the centre of their discourse, as explained in the presentation by Lauran Bonilla-Merchav on the role of the food museum.