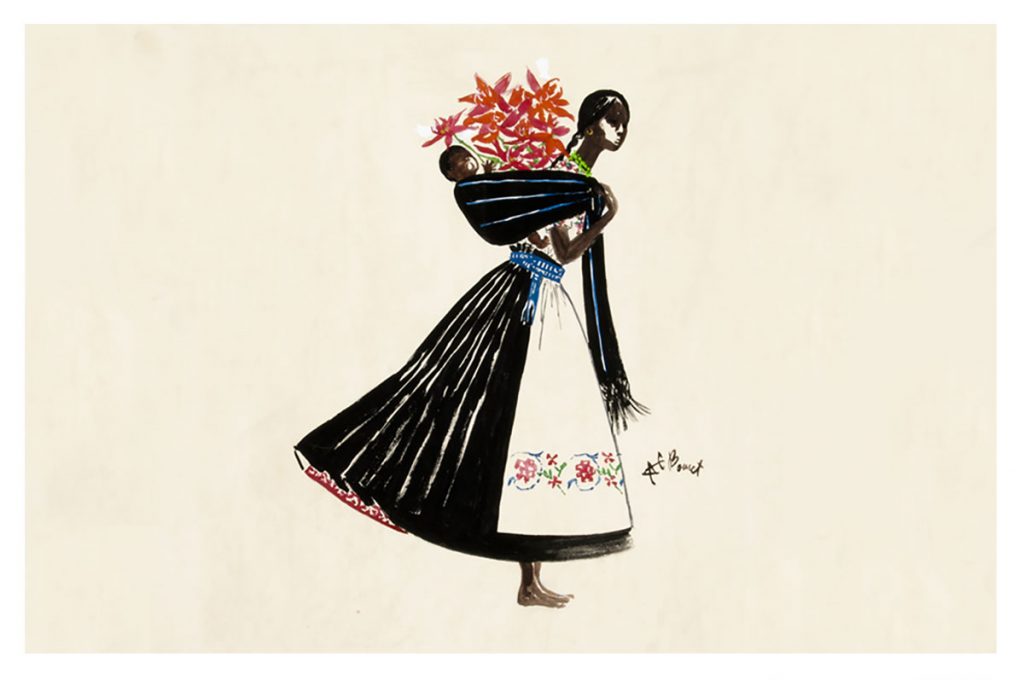 In 2019, the RMIT Design Archives (RDA) was delighted to host Masters of Cultural Heritage student Rebecca Lloyd. Rebecca’s internship focussed on the archive of Alfredo Bouret, in particular his illustrations of traditional Mexican costumes. When Rebecca began her internship, the brief was to concentrate on writing interpretative texts for a small group of previously uncatalogued illustrations in the RDA’s collection; however, the project delivered much more – providing great insights into Bouret’s life in Mexico and Paris.

Mexican-born Alfredo Bouret (1926-2018) was one of fashion’s acclaimed illustrators, as well as an inventive visual merchandiser and successful retailer. Born Alfredo Gonzalez Acevez in 1926 of Mexican-French parentage, Bouret studied part-time at the Mexican School of Art in the 1940s, while working in advertising and with artist Josefina Mesa as a costume designer for Mexico’s nascent film industry. From 1946 until 1948, his fashion illustrations appeared in the pages (and on the covers) of the Mexican fashion magazine La Famille.

In 1947 he won a six-month design scholarship to Paris at the first Fair and Exhibition of the Mexican Fashion Industries. His prize-winning entry was an illustration of a Mexican costume. Bouret arrived in Paris in 1948 and briefly worked as an apprentice designer for Pierre Balmain, who advised him to concentrate on fashion illustration and introduced him to the editor of French Vogue. From 1948 until 1962, Bouret’s sketches of the latest couture fashions appeared in the pages of French and British Vogue. Notably he was the only artist permitted to record the collections of Balenciaga.

Alfredo Bouret pictured on the right, at an exhibition of Spanish drawings at Rancho Del Artista, Mexico. Photograph in Scrapbook relating to the life and work of Alfredo Bouret, Gift of Les Robert Aitken, 2007, RMIT Design Archives Collection, 0115.2010.0001, Unknown photographer.

During her internship, Rebecca developed a rapport with Elena Ana Mallet, a design curator living in Mexico City, who had contacted the RMIT Design Archives Archive seeking information about Bouret and his creative practice. Rebecca kept in touch with Mallet during the internship, and Mallet’s insights into the context of Bouret’s early work in Mexico were invaluable.

Mallet suggested possible antecedents for his work, including Luis Marqués Romay (1899-1978), a Cuban photographer living in Mexico who did an extensive study of Mexican traditional costumes in the 1930s. As well as artist Carlos Mérida (1891-1978), who fused European modern painting with Latin American themes (especially those related to Guatemala and Mexico) and became fascinated by Mexican folklore. Mallet also suggested that Ramón Valdiosera (1918-2017) a Mexican costume designer, who developed an interest in Mexican clothing and incorporated motifs into garments for the modern woman, may also have provided a precedent for the Mexican inspired fashions Bouret later developed for his Mexicana stores.

Rebecca studied and catalogued a selection of Bouret’s drawings, trawled through his scrapbook, a treasure trove of press clippings, photographs and other ephemera, rehousing loose sheets along the way. Fortunately Rebecca’s tool kit included studies in Spanish in Granada, Spain in 2017, and experience transcribing texts from hand written documents. She carefully studied the Spanish language annotations on the drawings and resorted to Spanish-language blogs for further information about the costumes depicted in the illustrations and shared these with Mallet to double check her facts. Rebecca also located several more illustrations and annotated drafts and was “delighted to find herself immersed in Spanish cursive writing!” Her Spanish lessons proved a bonus for this project. 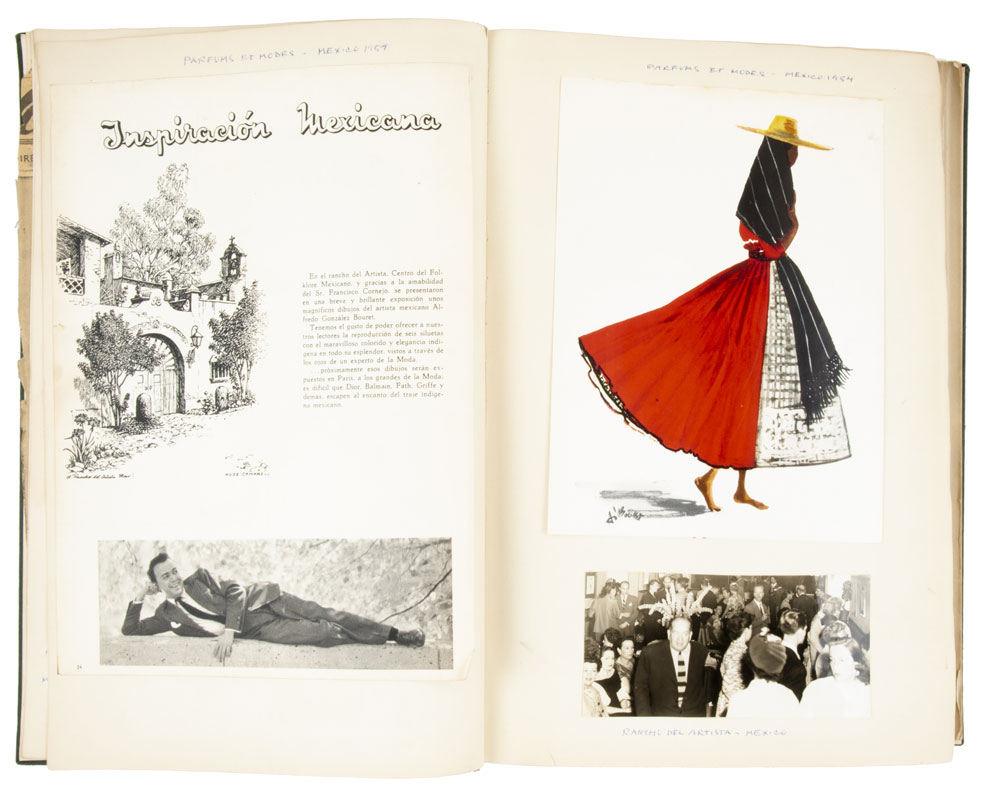 The scrapbook records the first exhibition of Bouret’s Mexican illustrations at ‘El Rancho del Artista’, which according to Mallet, is a mythical place in the history of Mexican art. In 1937, an artist village had been established in the Colonia Del Valle neighbourhood of Mexico City, and here numerous well-known artists operated, including Diego Rivera, Jorge Gonzalez and Jose Clemente Orozco.

Here is one of Rebecca’s new labels for the collection, which discusses El Rancho del Artista:

The exhibition at the Rancho del Artista took place between 2-5 April 1954, and featured twenty illustrations of indigenous Mexican dress, created by Alfredo Bouret circa 1953. Bouret returned to Mexico “year after year” after his move to Paris in 1948 (Excelsior 1954). On one such trip, Bouret had decided to illustrate various regional costumes depicting a side of Mexico that was “removed from what Hollywood and tourists saw as ‘Mexican’” (Lex Aitken, 2007). During this time, Bouret met with Diego Rivera and Frida Kahlo, who directed him in his journeys to remote communities; the whereabouts of some being almost hearsay and reachable only on the back of a horse or donkey. Over many months, Bouret compiled a collection of thirty-five illustrations of indigenous Mexican dress, depicting individuals from communities in the states of Puebla, Oaxaca, Jalisco, Michoacán, Chiapas and Mexico. These works showcase the diverse styles of dress created and worn by the people of these communities and received great interest and praise from Mexican and international communities alike in their exhibition. Of these thirty-five illustrations, twenty were exhibited at the Rancha del Artista in Mexico over 2-5 April. A second exhibition in was held at Jean Desses’ Bazaar in Paris between 19th November – 10th December the same year.

Under the patronage of Condé Nast and the Mexican ambassador to France, Jaime Torres Bodet, “fifty authentic costumes from the most picturesque regions” of Mexico were featured with the goal of spreading the “tradition and culture” of the Mexican people to the wider world (Gacetta Social 1954, Bouret Scrapbook, p.11). The exhibition was chiefly organised by Alfredo González Bouret and featured a series of the artist’s illustrations of indigenous Mexican dress, exhibited in Mexico earlier the same year. Bouret aimed to inspire Europe’s top fashion designers with the bright colours and designs of Mexican dress and provide a “true” representation of Mexico outside of what was depicted in Hollywood at the time (Lex Aitken, 2007). The exhibition in Paris, like the one in Mexico, was a success, and received a great amount of interest and praise from international audiences. Bouret’s illustrations of Mexican dress were accompanied by traditional hand-crafts, jewellery, textiles and costumes imported from Mexico for the exhibition. Adaptations of traditional fashions were created by Parisian designers, and displayed on mannequins beside Bouret’s original illustrations. 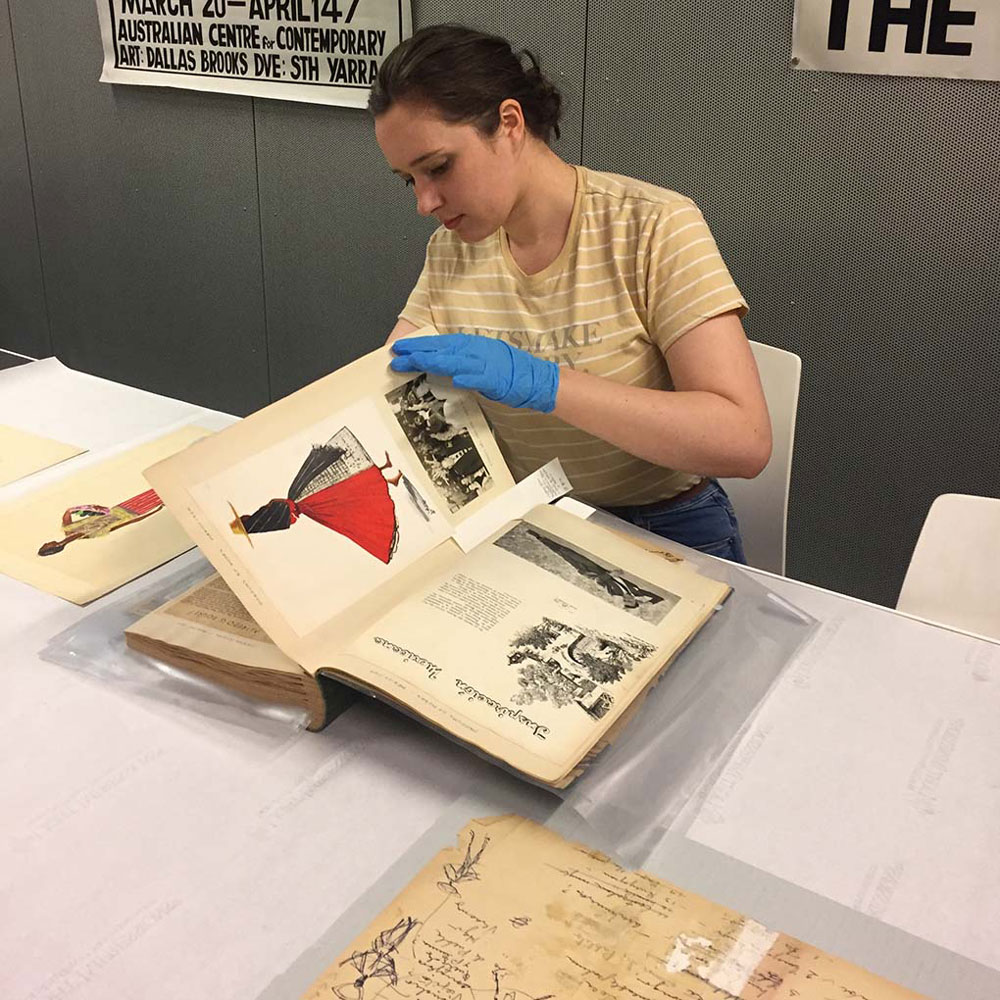 Also pasted into the scrapbook are clippings from the Mexican paper Excelsior, many of which mention the positive tourism that Bouret’s work would bring to Mexico. One such clipping states,”Alfredo Bouret el mejor embajador que México puede mandar al Viejo Mundo”. [“Alfredo Bouret the best ambassador Mexico can send to the Old World”]. (Interestingly these records are not easily accessible in Mexico, as the digitisation of newspapers and periodicals is not as common as in Australia).

In 1962 Bouret opened a Mexicana store in London, where he sold Mexican wares as well as his own range of Mexican inspired fashions. Then in 1969, his long-term partner, Australian-born interior designer Lex Robert Aitken, suggested he open a Mexicana store in Sydney, Australia, which he did in a business partnership with British fashion designer John Cavanagh. The Australian venture lasted just 3 years. When the boutique closed in 1972, Bouret returned to London.

Bouret closed his London store in 1985 and settled in Australia, becoming an Australian citizen in 1990. Following the death of his partner Lex in 2013, Bouret moved to Canada where he lived his last years with his sister and her family. Bouret died in Vancouver, Canada, in 2018, aged 90.

Rebecca showed great curiosity and rigour during the internship, leading her to explore the political and social contexts in Mexico that prompted Bouret to create the illustrations. Her research uncovered a fascinating story, previously hidden in the Archives, of cultural exchange between Paris and Mexico and Bouret’s role as an ambassador for Mexican culture, through his illustrations and then later through his Mexicana stores in London and Sydney.