“We want people to be entertained, inspired and challenged by the material we preserve and present”: Interview with Kasandra O’Connell 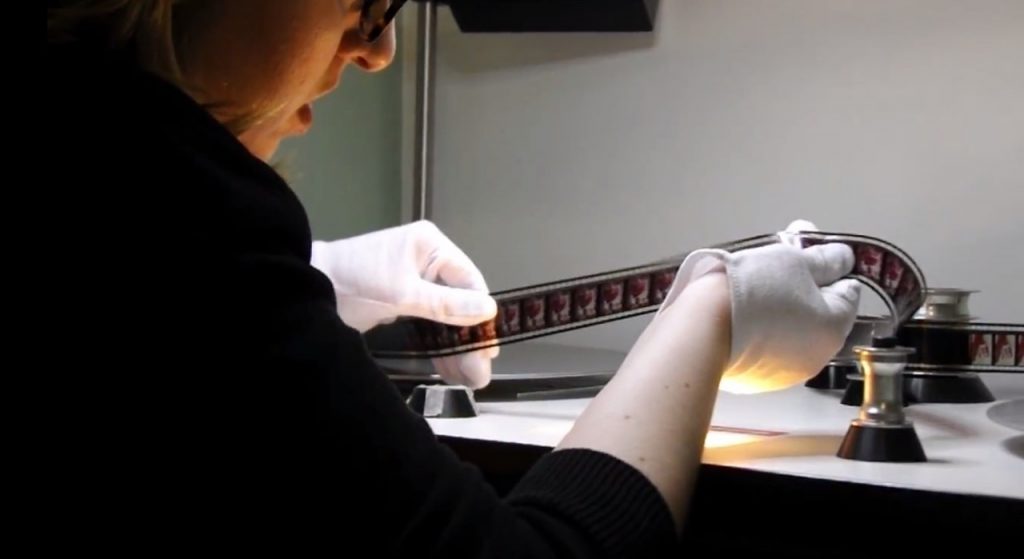 Today, I’m speaking with Kasandra O’Connell, head of the Irish Film Archive at the Irish Film Institute in Dublin, Ireland. We discuss the Archive’s origins, its activities at home and around the globe, and its ongoing effort to open up Irish cinematic culture both to the people of Ireland and to the rest of the world.

(Archivoz) As the head of the IFI Irish Film Archive, what does your job entail? What are some of the main things you’d like to accomplish/foster in that position?

(K.O.) Although the IFI Irish Film Archive is custodian of a national collection, we are also one of nine departments within the Irish Film Institute (IFI) and have quite a small team (12). Unlike other larger archives where roles are quite strictly defined, our staff tend to be involved in a range of activities. Consequently, my duties are quite varied: much of my time goes to strategy and policymaking, applying for grants and other types of funding and liaising with our stakeholders. I also work on a lot of preservation and access projects with my amazing team. Although we do still receive film material into our collection, like most other archives we have spent most of the last decade transitioning to a digital environment. We began by developing a Digital Preservation and Access Strategy, which shaped our route from analogue to digital collections management. As a result, we boast a very robust digital preservation system which has won several international awards in recent years.

I’ve held my job for 20 years, and my aims for the archive have evolved over time. When I first joined the IFI my focus was on ensuring adherence to internationally recognized standards, since our existing policies and procedures hadn’t originally been developed as part of an overall collections management plan. I introduced the SPECTRUM museum collections management standard, which is now the basis of all our collections management activities. Having previously worked in the National Museum of Ireland, I knew this standard would work well with a moving image format. We were recently accredited under the Museum Standards Programme for Ireland, which is a scheme to promote and benchmark professional standards in collections care, so I feel our work in this area has been recognized and validated.

At present, we raise awareness of our work and the importance of film preservation through publication, workshops, exhibition and outreach; we also have an active education strategy. I would like to expand these activities to foster further understanding of moving image preservation in the community at large. We host interns from various university courses throughout the year and teach a media archives MA module for our partners at Maynooth University; unfortunately, due to COVID-19 restrictions, this program has been postponed this year. My ultimate goal is to open a museum of Irish film in the vein of the Berlin Film Museum, a place where we could display our artifact collection and tell the story of Irish cinema and cinema-goers.

(Archivoz) I’m fascinated by the Institute’s religious origins. Can you give us a bit of history, and tell us how you went from moral guardianship to offerings like the Horrorthon, which you advertise as “the bloodiest event in the Irish film calendar”?

(K.O.) At the start of the 20th century, the Roman Catholic Church was very concerned about the nascent film industry—particularly in Hollywood–and its moral effect on the religious. As a result, Pope Pius XI issued the Vigilanti Cura (1936), which stressed the importance of the Church’s involvement in all aspects of motion picture production and consumption. In Ireland, this encyclical prompted the establishment of the National Film Institute (NFI) in 1943, under the direction of the Archbishop of Dublin, John Charles McQuaid. The NFI’s mission was to counteract the influence of unsavory foreign films, and it accordingly collected, distributed, and occasionally created cultural, educational and public information films.

This material became the basis of an embryonic Irish Film Archive. A group of progressive film educators, practitioners and historians took control of the NFI board in the early 1980s with a view to reforming its ethos. They removed all references to the Church from the Institute’s constitution and redirected its focus from moral guardianship to a critical engagement with the art of film. From this point on, the approach to exhibition, programming and audience development changed dramatically, and over time the Irish Film Institute (IFI)—as it is now called—has come to engage with a number of disparate audiences. This outreach includes our festival work (e.g., French Film, Family, and Documentary and the Horrothon); our schools programme, IFI International; and our regular programming, which includes new releases, classics and undistributed material.

There is a large community of horror fans in Ireland, so Horrorthon, which takes place over the Halloween bank holiday weekend, is one of our most popular festivals. Fans are able to meet up at the Institute and indulge their love of all things ghoulish and gory. This year, of course, was somewhat different, since the lockdown forced us to hold all screenings online via our new streaming platform, IFI@Home.

(Archivoz) You actually have a movie theater as part of your establishment, and due to COVID, you’ve been closed at least periodically throughout the year. Under the circumstances, how does the IFI continue to enable interaction with Irish film culture? Is any of your content accessible remotely?

(K.O.) We have three cinemas in our main complex in Temple Bar (which is a converted 17th century Quaker meeting house). We also have a bookshop and café bar, so it is a very social space. We have always made great use of that through a number of Irish film exhibition strands led by our Irish Film Programming department. However, since the pandemic began we have been almost entirely closed to the public. This has obviously restricted our ability to reach traditional audiences, but fortunately our IFI Player allows us to give free global online access to material curated from the Archive. The IFI Player’s viewership has grown steadily since it launched in 2016, but COVID-19 prompted a lot of media interest in the platform. As a result, we saw an increase in users seeking an alternative to commercial platforms such as Netflix, Amazon, or others. 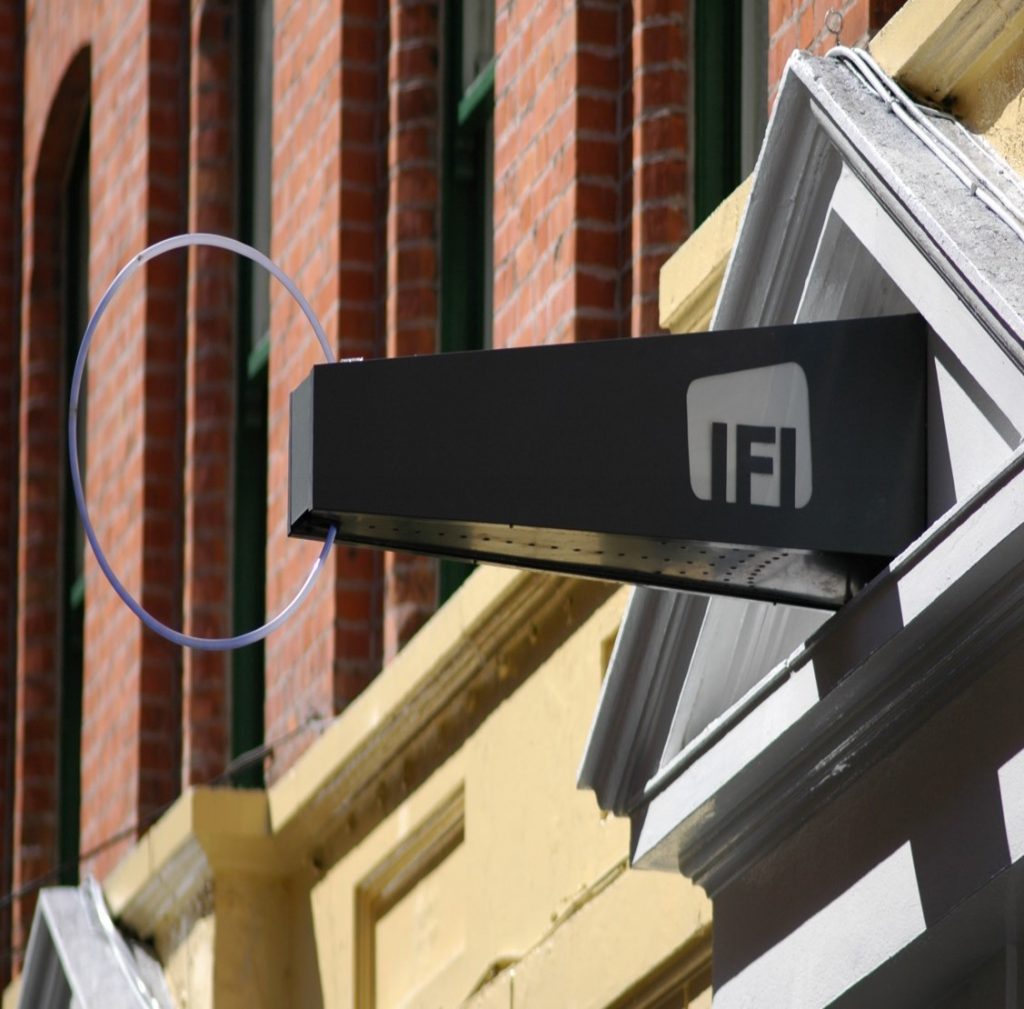 Recently, the IFI launched two other streaming platforms: IFI@Home and IFI@Schools. These platforms have allowed the Institute to continue its programming activities through festival and exhibition work. Although their use is restricted to Ireland, the response has been very positive and technology has allowed us to connect with our audiences during this challenging period.

(Archivoz) When I look at new libraries or archives, the first thing I check out are their special collections. Can you tell us a little about yours? Do you have a favorite?

(K.O.) Alongside our 30,000 cans of film, the IFI Irish Film Archive’s Special Collections holds approximately 200 filmmaking equipment artifacts, such as cameras, projectors, and sound recorders that afford us additional insight into the history of filmmaking in Ireland. In terms of a favourite item, I’m going to be very obvious and say the 1986 production design Oscar given to us by Irishwoman Josie MacAvin, which she won for her work on the film Out of Africa. The Academy Award is such an iconic item and we are honoured to have one on permanent display in the collection. MacAvin also donated an Emmy she won for Outstanding Art Direction on the 1994 miniseries Scarlett.

(Archivoz) Why is it important that the public be exposed to film culture and cinematic heritage? How does the concept of “pop culture” relate to what you do? Is there a difference between it and “film culture” properly conceived?

(K.O.) As the national cultural institution for film and film culture in Ireland, it is the multifaceted nature of the material we hold that gives it its heritage value. It is an historical record and a social document, as well as a means of entertainment and education. Our collections capture in a uniquely accessible manner the changing landscape of the Irish nation, alongside changing attitudes, customs and social conditions. It is important that the public be exposed to film heritage because the things we have chosen to record and the stories that we commit to film tell us much about our interests, beliefs, hopes and fears. We feel that the moving image is the most democratic medium of our age, reaching across all ages, abilities and social groups. We endeavour to present film in a non-elitist way, enabling audiences to engage with it on a deeper level, or merely to experience our collections as a source of entertainment. We want people to be entertained, inspired and challenged by the material we preserve and present.

Although our collection contains titles many might consider part of pop culture, particularly those related to television reality programming, as an archivist I’m not snobbish about the categories of content we take in. I think the main distinction between pop culture and film heritage is a change in perspective afforded by the passage of time. Films that initially may seem lightweight and populist over time can develop new layers of meaning,  which may resonate differently with future audiences, so it is incumbent upon us not to be too prescriptive in our selection and acquisition policies. Material considered frivolous or “pop” by today’s measures will eventually be a fascinating insight into the media and cultural landscape of the early 21st century and therefore is as valuable to us as any other social or historical artifact.

(Archivoz) What sort of international presence does the IFI have? How do you share your content with the rest of the world?

(K.O.) The Archive engages with the international archival community, particularly FIAF (The International Federation of Film Archives). We often contribute to publications and present at conferences and symposiums, and I was part of a 2018 FIAF initiative that went to India to teach film collections management. We regularly collaborate with film archives around the world: for instance, we are currently finishing the EU-funded restoration of an Irish film called Blarney (1938) with material from the BFI and UCLA. We also do online advocacy work for archival preservation via public seminars, workshops, panel discussions and webinars. Most recently we are taking part in a partnership project called Make Film History that engages with young filmmakers and makes archive material available to them for free. 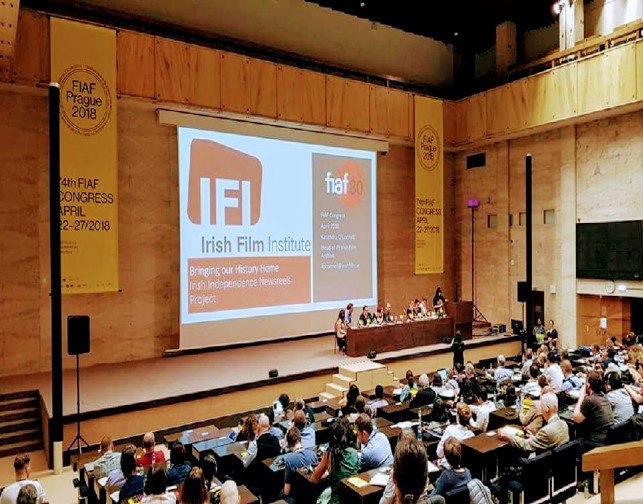 We are also globally active through IFI International, which provides Irish film programming to cultural exhibitors worldwide. IFI is managed by the Irish Film Programming Department, which draws on IFI Irish Film Archive’s collections and liaises with film directors, producers, sales agents and distributors in order to develop a global audience for Irish film culture. IFI International works with over 100 exhibition partners in more than 50 countries annually to provide access to new and classic Irish cinema, presenting material in contexts which enhance understanding of Irish cinema and provide new routes for audiences who may be unfamiliar with Irish culture. It is an excellent mechanism for sharing our collections theatrically around the world and allows the IFI to create meaningful partnerships with festivals, venues, musicians and archives in many different geographical locations. It also complements the IFI Player’s personal viewing experience, allowing audiences to experience Irish film in a communal setting.