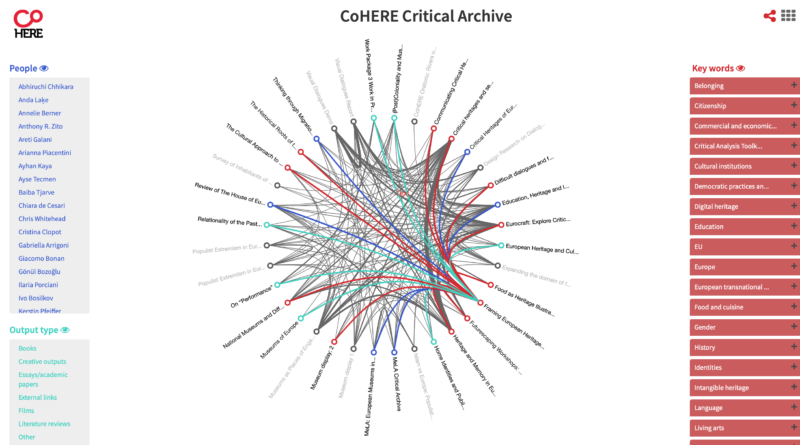 CoHERE (Critical Heritages of Europe: performing and representing identities) was a large, European Commission-funded project responding to an instrumental drive to solve critical social and political problems in Europe through recourse to heritage. The project was one of the largest investigations to date into the politics of heritage in and of Europe. Concluding in March 2019, it comprises three years of research conducted by a consortium of institutions over nine countries, including eight universities, one research institute, two museums and a non-profit cultural network, led by Newcastle University in the UK. The project sought to identify, understand and valorise European heritages, engaging with their socio-political and cultural significance and their potential for developing communitarian identities. Addressing multiple senses of political and social crisis in the EU, researchers explored the ways in which heritages can be used for division and isolation, or to find common ground and ‘encourage modern visions and uses of its past’ as hoped for in EU and Council of Europe policy

CoHERE involved a general subscription to the idea that heritage can produce civil and societal benefits, but that this should be tempered by a realist understanding of the ways in which heritage can be used against civility, against EU values, against unity and against difference. CoHERE challenged the dominant narrative of European policy and discourse. This presents heritage unequivocally as a social good and as a means of creating communitarian identities likely to counteract division within and disaffection with the EU. Instead, heritage – the symbolic valorisation of the past in the present by social actors, whatever their position and type of agency – is often embedded within socio-political crises and identity contests, and instrumental policy and practice need to recognise these difficulties in order for substantial communitarian and civil benefit to become possible.

The implication of heritage in social division is readily illustrated by mobilisations of European pasts in right-wing populism, in discourses around belonging and bordering connected to the Refugee Crisis, and in contemporary seismic shifts such as Brexit. It is at its height in cases of othering, exclusion and even terrorist violence, where notions of European heritage and identity are used to justify political and socially divisive action in the present. Much of European heritage and memory policy attempts to create unity from situations of conflict and disharmony between and within diverse populations. However, the recognition of past and present differences, of marginalisation and of imbalances of power within difficult memories (as well as a difficult present) is crucial to preventing alienation from the idea of a harmonious EU. Contemporary population movements, political polarisation and populism all feed into and from notions of who or what is or is not part of a ‘European heritage’. Historical explorations of diversity that show longer histories of inter- and trans-cultural exchange and negotiation may ameliorate social tensions in the present and combat mistaken views of a harmonious, monocultural past ruined by present-day multiculture and the incursion of others into Europe. Typical narratives of European heritage can be exclusionary and researchers argued for the need to entertain a more complex set of stories as an account of the European past. As an example, the Classical past is often presented as one of the touchstones of European heritage, exemplified by the idea of ‘heritage’ as ancient ruins, historic texts, significant figures, etc., but contemporary Europe comprises  people with diverse and multi-layered identities, connected to places within and beyond the boundaries of the EU.

the recognition of past and present differences, of marginalisation and of imbalances of power within difficult memories (as well as a difficult present) is crucial to preventing alienation from the idea of a harmonious EU Click To Tweet

The project explored these issues across multiple areas, including museums and heritage sites that represent European history, uses of the past in party politics (such as Front Nationale’s use of Joan of Arc, or references to Magna Carta as part of Brexit ‘Leave’ campaigns), heritage festivals, school curricula, historical re-enactment, folk music traditions, digital and online heritage practice, and the importance of food for understandings of European and national histories. This shows that heritage is more widely significant than current European heritage policy recognises. In place of an idea of heritage as embodied only in historic buildings, landscapes and practices, researchers argued that heritage is more like a force circulating through all sorts of cultural practices – from official uses of the past by governments, to the everyday ways in which people rely on a sense of history to position ourselves and articulate their identities and belongings. Current heritage policy is dispersed and disconnected, yet heritage itself is connected to many aspects of European life today – to our politics, society, places and people and to the ways in which EU member states are perceived, positioned and bordered.

Another novel aspect of the project was the development of the research over multiple cultural forms. As well as producing conventional academic research in the form of books and journal papers, researchers also made films, composed and performed music, designed videogames and developed new ways of working for the heritage sector. The film Who is Europe? by renowned documentary filmmaker Ian McDonald was commissioned as part of the project to explore the complex ways in which the past circulates in the present, not always with the positive connotations of ‘heritage’ as a valuable legacy of the past. Ethnomusicologist and composer Valdis Muktupavels composed the oratorio Rivers of our Being as a way of exploring both the confluences of European folk musics and the contemporary politics of EU fragmentation. As part of the EU-research funding, many of the book chapters and publications are freely available as open-access online documents, including the keystone book for the project Dimensions of Heritage and Memory: multiple Europes and the politics of crisis. In addition to this, researchers contributed to the CoHERE Critical Archive, which was built to be a fast-response, searchable platform to offer free online resources, work in progress and short reports on the key research topics about European heritage to a wide audience. The Archive contains films, music, essays, reports and links to a range of other project outcomes.

CoHERE was built to be a fast-response, searchable platform to offer free online resources, work in progress and short reports on the key research topics about European heritage to a wide audience Click To Tweet

The results should be exploited by politicians, heritage policy makers and practitioners with a view to their wider effects upon general heritage audiences, broadly understood to include all those who engage with representations of the past in the present via museums, sites, commemorative events, re-enactments, historic festivals, formal education, food culture, and politics. The specific aim is to inform policy and practice about the nature of identity contests in which heritages are important and generate ideas about how to respond and intervene with responsible and innovative strategy, particularly at the level of official heritage. This has the connected aim of influencing public attitudes in ways that ameliorate social division where heritage is implicated and mobilized, and to equip practitioners with the tools to respond constructively to identity contests, othering and fast-moving socio-political change.