“With Map Warper we can turn pixels into real geographic information”: Interview with Asa Letourneau, at Public Record Office Victoria

(Archivoz) Can you please describe what the PROV Map Warper is, and what map rectification is?

(Asa Letourneau) With Map Warper we can turn pixels into real geographic information by layering our historic maps and plans onto a web mapping tool. This process, called rectification, allows us to visualise how places have evolved over time. Very simply, the user places markers or ‘ground control points’ on the historic map and on corresponding points in the exact same location in a real-world, online map. The open source Map Warper software then assigns latitude and longitude values to those points as well as the x/y position of the pixels in the map image corresponding to those points. The result is an overlay of the historic map image on top of the contemporary world in the correct location. 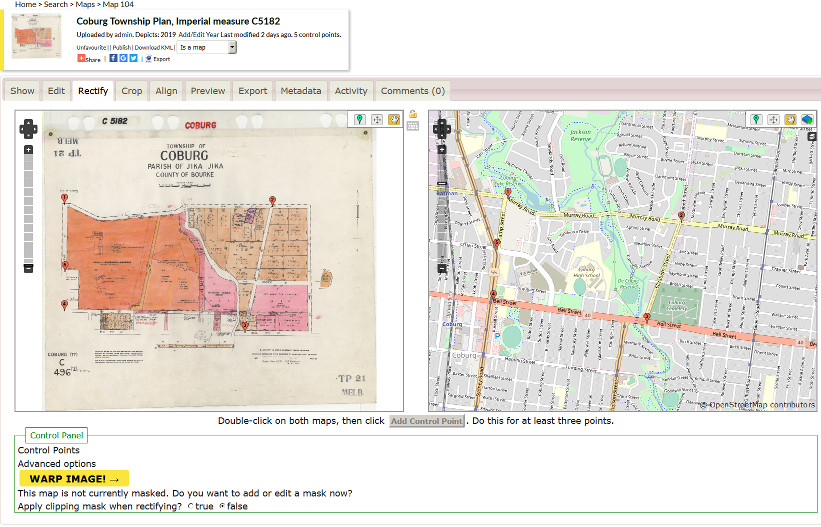 (Archivoz) Why did you develop the tool? What benefits does it provide to PROV and users?

(AL) The goal was to make it as easy as possible for our users to find maps and parish plans in our collection. One of the major barriers to finding historic maps and plans is that they use historic names no longer known or used in Victoria. Most of our users aren’t historians or archivists. However, if you create metadata that associates the historic name with its contemporary location name—or even better its latitude and longitude co-ordinates—researchers will be able to search for these historic records by using the modern location names they are more familiar with. Plus, now with the Map Warper tool, they can also scroll across a modern-day map to find relevant historical maps and plans in the PROV collection. Importantly, this project also benefits PROV as it is feeding geospatial data back into our systems to enrich our records.

(Archivoz) How did you go about developing the Map Warper platform at PROV? What was the process you undertook?

(AL) The process was tackled in two stages. The first stage involved a team of volunteers compiling geospatial metadata for thousands of parish plans including the key data, contemporary equivalent location names for historic parish names and latitude/longitude co-ordinates for contemporary locations. The second stage involved liaising with Tim Waters, a freelance geospatial developer based in the UK. I worked with Tim to build a PROV version of his own Map Warper site (he also built one for the New York Public Library some years ago). Once the PROV site was built and tested, content was imported and crowd sourcing of rectification began.

(Archivoz) Can you please provide some more information about the specific software used to develop the PROV Map Warper? Can other archives use it too?

(AL) Tim Waters’ open source Map Warper software rectifies and overlays historic maps on a base map of the contemporary world. The base map used is not Google Maps but instead Open Street Map that is non-proprietary and built by a community much like Wikipedia. Libraries and other institutions have used it, including the New York Public Library, National Library of Australia, Harvard, Stanford Universities, Leiden Archives (in The Netherlands), The Department of Education and the National Environment Protection Authority (US Federal Government), and Wikimedia Commons.

(Archivoz) How has the PROV Map Warper been received so far?

(AL) The service was launched on 12 June 2019 via a blog post on the PROV website. As of late July, 2,726 maps have been rectified and 206 user accounts have been created to do this, which is a fantastic result so far.

(Archivoz) What are your future plans for the PROV Map Warper?

(AL) In the future we hope to link historic maps and plans in our archive catalogue straight through to their overlay view in the PROV Map Warper and vice versa. To do this we will replace the current Map Warper unique identifiers for each Map with the PROV unique ‘Record Item’ identifiers (found within the landing page URL for the record in the catalogue). While we are offering thousands of parish plans as our initial content for rectification, we have already drawn up a list of possible future cartographic series. These include the Historic Plans Collection, the Melbourne Metropolitan Board of Works plans and aerial photographs from a number of record series (once the photographs have been digitised). Given that Map Warper comes with an API, it would be useful to explore to what degree it could be used to manage imports and exports of content programmatically. For example, we could provide access to developers and other GLAM institutions. All of this has yet to be determined but these options illustrate the potential and contributions that PROV Map Warper could make in the future.

(Archivoz) Finally, where should people go for more information about Map Warper?

(AL) People can go to the PROV website and read the ‘How to find parish plans’ blog. This blog features a video about how to use Map Warper and information about how to sign up to help us rectify maps and plans in our collection.